Phelps Has Starring Role In Barefoot In The Park 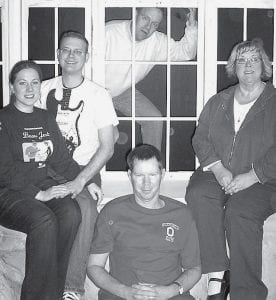 Bill Phelps, Archbold, has a starring role in the Archbold Community Theatre production of Barefoot In The Park, which will be presented March 6-7-13-14-15 at Giffey Hall, in the Ridgeville Corners Theatre District.

Phelps is no stranger to the stage, having participated in several ACT productions in many roles.

Barefoot In the Park was the third effort by Neil Simon. It centers around newlyweds living in a tiny apartment in New York City. The apartment is on the fifth floor, has no bathtub, a stove that doesn’t work, and a hole in the skylight. On top of that, there’s an eccentric neighbor, with whom the new wife sets up on a blind date with her quiet and reserved mother.

Barefoot In The Park originally opened on Broadway Oct. 23, 1963, and ran for more than 1,500 performances. It was turned into 1966 and 1970 television situation comedies; the 1970 version featured an African American cast.

There was also a 1967 motion picture starring Robert Redford and Jane Fonda as the newlyweds.