Boys prepare to perform what can only be called “The March of the Air Guitars,” as they get ready to walk across the dance floor while pretending to play rock guitars. From left: Tanner Rufenacht, Aaron Bruner, Aaron King, Josh Borton, Arrin Short, Travis Beck, Zach Pursel, Logan Beck, Kyle Beck, Tyler Herschberger, David Reyes, and Caleb Yoder. All are Pettisville students.

After years of having the Pettisville High School Prom at PHS, the 2012 edition, Saturday, April 14, was moved to Nazareth Hall, near Grand Rapids. The theme was “Phantom Of The Opera.”

Nathanael Betz revels in the moment on the dance floor. 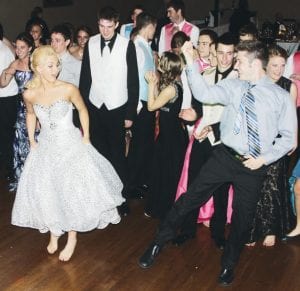 Leading the dancing are Kaylee Dougherty, a PHS senior in the white dress at left, and Trey Rupp, in the gray shirt at right, a junior from Wauseon.– photos by David Pugh