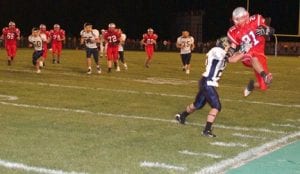 The Patrick Henry Patriots came out on fire Friday night, jumping out to a 14-0 lead in less than two minutes on their way to a 35-7 NWOAL victory over Archbold.

PH held a 28-0 lead at halftime. Archbold scored its only touchdown at the 9:04 mark of the third quarter on a Jacob Fidler 3-yard run. The Patriots scored their last touchdown at the beginning of the fourth.

PH guaranteed itself at least a share of the league title with the victory as it upped its record to 7-0 with one league game left and 8-0 overall. Archbold dropped to 5-1 in the league with two games left and are 7-1 overall.–Posted 10.11, 10:02 p.m.