by Deb Neuenschwander
Special to the Buckeye 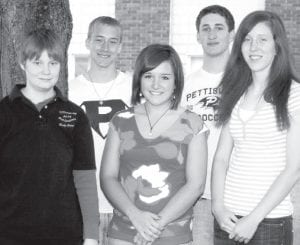 Even though the Pettisville graduating class of 2010 will be one of the largest graduating classes the district has ever had, the seniors say they enjoy the close relationships that come from attending a small school.

Fifty-five are expected to graduate, just three less than the Class of 1973, which holds the record with 58 graduates.

“When I first came, it was easy to make friends, and everyone was really nice.”

Emily Short, another open enrollment senior, agreed, saying that being from outside the district was never an issue.

“Honestly, I don’t even really know who is open enrollment and who lives in the Pettisville district,” Short said.

“We are all just one class, and we are all friends.”

Lauren Bontrager said friendliness extends even beyond her own class.

“The students in our class talk to everyone, including students in other grades,” she said. “Everyone has friends in other classes, and no one is really left out.”

“I moved in, but I made friends right away, and it was nice because it just seems like everyone fits in,” said Chelsea Schmucker.

The PHS Class of 2010 has a mix of students who are involved in lots of different things.

“No one group really stands out,” said Lincoln Frey. “Even those who are more quiet and shy still fit in, and we all talk to each other.”

Although Short is technically an open enrollment senior, she has attended Pettisville since kindergarten.

“I wanted to go there because of the good program they offered, which will benefi t me when I go on to study art in college,” Short said.

How did going to Four County compare to Pettisville?

“It seemed big when I first got there, and I didn’t know anyone,” Short said.

“I made friends, but my best and closest friends are still here at Pettisville.”

All the students interviewed had good things to say about the school and staff.

“The teachers at Pettisville really seem to be looking out for you, and want what’s best for you,” said Bontrager.

“They care about you as a person.”

The teachers were praised for making classes fun and interesting, even when the subject was not the students’ favorites.

“English is definitely not my favorite subject,” said Waidelich, who plans to major in computer science at Bowling Green State University. “But I really liked English class anyway.”

“Math is hard for me,” Bontrager said. “But Mr. Nafziger (Charles Nafziger, math teacher) understands and helps me, even when I go in after school.”

“He makes class fun, and makes it easy to learn,” she said.

Schmucker also liked art class, because of the more relaxed atmosphere the class provided, and she enjoyed math class because it was clear-cut “with no gray areas.

“Your answers were either right or wrong, and I liked that.”

The graduates appreciated their school, but they also mentioned appreciating the support the school gets from the community.

“The students here have a lot of support, not just right in Pettisville, but from Wauseon and Archbold and other places around the area,” Frey said.

“We get donations from people in the area to support things, like buying jackets for our track team, and it is so great.”

“They support benefits for people who have needs, even when they may not know the person all that well,” she said. “We have to be really thankful for that– the way people show they care.”

The support is not just fi- nancial.

“When my dad died last year,” Bontrager said, “our whole family felt support from everyone around. I knew that people wanted to be there for me and for my family, whatever we needed. You don’t get that everywhere.”

“I think a small community, where everyone has connections with everyone else, is more close-knit,” Frey said.

“They may not know you, but they know some of your family, or they know people you know, and so they care more.”

Although the students all enjoyed the benefits of a small town and a small school, they are ready to spread their wings and try some new experiences.

All those interviewed have college plans. Waidelich and Short plan to attend BGSU. Frey will go to Trine University, Angola, Ind., to study civil engineering and run on the track and cross country teams. He was a standout runner at Pettisville.

Schmucker plans to go to Goshen (Ind.) College. Although she is undecided about her major, she will play volleyball, a sport she has concentrated on during the past two years.

“I like it here a lot,” Bontrager said. “Everybody knows everybody, and that can be nice. But I’m ready to get away; to start with a clean slate and experience new things.”

Although the students in the class will spread out, all agreed they hope to stay in touch.

“My friends are important to me,” Short said. “I will miss seeing them, but I hope we will always be friends.”

With the help of modern technology, the Class of 2010 should be able to continue the friendships that have characterized them throughout their school years.