Rachel Beck was the first Pettisville girl to cross the finish line against Archbold and Evergreen, Tuesday, Aug. 28. Beck was third; the Blackbird girls took third through seventh places and won the meet.- photo by D.J. Neuenschwander

The Pettisville girls and boys cross country teams defeated Archbold and Evergreen to take home victories at the first meet of the 2007 season, Tuesday, Aug. 28

Runners on all three teams struggled due to weather conditions on a hot afternoon when the local thermometers showed temperatures topping 90 degrees.

The girls won the tri-meet with a score of 25 points. Evergreen took second place with 41; Archbold was third with 69. 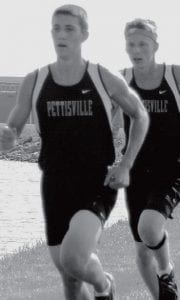 Alex Frey, left, led the Blackbirds to victory in the boys race against Archbold and Evergreen. Austin Borton, right, was second. Pettisville captured five of the top eight places in the race to win the tri-meet.- photo by D.J. Neuenschwander

In the boys race, Pettisville grabbed the first four places and won the meet with 18 points. Archbold was second with 47; Evergreen had 63.

Leading the Birds was senior Alex Frey in 17:44. Austin Borton followed in 18:11. Lincoln Frey and Brandon Hamilton raced each other right up to the finish line, with just two seconds separating them in the end. L. Frey finished third in 19:33; Hamilton was fourth in 19:35.

Fifth for Pettisville was Josh Bruner. He was eighth in 21:08.

Tom Wagner, PHS coach, was pleased with his teams and the double wins.

“The conditions weren’t great with the heat, and no one was happy with their times,” he said. “We hope to improve the times in future meets.”

The girls team and the boys “B” team are scheduled to run at the Archbold Invitational meet, Saturday, Sept. 8. The boys “A” team runs at the Tiffin Carnival.