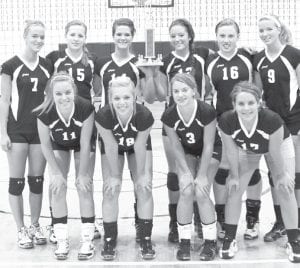 PHS played the host Wildcats for the championship, and once again it came down to a deciding third game. Pettisville won the first game 25-22, but Kalida took the second, 25-7. The Birds won the title with a 25-20 third-game victory.

School officials said it was possibly the first invitational the girls volleyball team has ever won. The Birds haven’t played in very many invitationals in the past,

“We are a well-rounded team and played solid ball in all phases of the game in Kalida.

“We faced some good competition. The girls played well enough to control the tempo of most of the games, and forced our opponents into some softer attacks and tough serve receives.

“I was very proud of our effort, mental toughness and all-around team play.”

K. Yoder had eight kills in the championship match against Kalida. Garcia had five and Hubby had four. T. Yoder and King each served two aces. Hubby had two solo blocks; King had one.