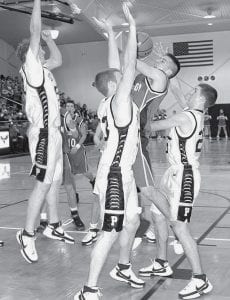 The Pettisville boys basketball team hit seven treys on its way to a 75-54 victory at Edon, Friday, Feb. 15.

It is the sixth straight Buckeye Border Conference title for the Birds.

Pettisville won the title outright with a 9-1 BBC record. The Birds are 15-5 as they head into the Division IV sectional tournament.

Lucas Nofziger made a layup 10 seconds into the second period and stole an inbounds pass, leading to a Josh Bruner tip-in which gave Pettisville an 18-15 lead.

The Birds caught fire in the middle of the second, hitting three straight treys to push the lead to eight. Quinn Nofziger received an outlet pass from Bruner and laid the ball in for a 29-19 lead with 4:45 left in the period.

The Birds play the winner of last night’s Hilltop-North Central game at 6:15 p.m.

The winner plays in a district semifinal against one of Ottawa Glandorf’s sectional champions at Napoleon, Tuesday, Feb. 26, 6:15 p.m.

In the other sectional at Bryan, second-seeded Stryker plays Edgerton tonight, Wednesday, at 6:15 p.m., while Edon plays Fayette in the nightcap. The winners play each other, Friday, Feb. 22, 8 p.m.