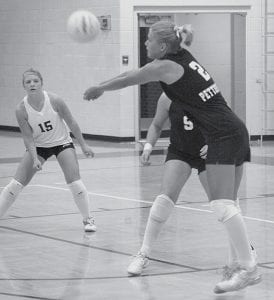 The first and second games remained tight throughout; the largest gap was six points. The Eagles mishandled the ball at game point to give PHS the first-game win, and a Jessica Henrie kill sealed the secondgame victory.

North Central took a 7-1 lead in the third game. Pettisville came back to take a 9-8 lead, and the score remained close until the Eagles took a 20-17 lead. Down 17-24, a Haley Nofziger kill closed the score to 18-24, but Pettisville’s back row spike went into the net on the next play, giving NC the game.

Karina Rohrer-Meck successfully dinked the ball for a 23-10 lead, and after North Central got the serve back, Leah Sellers’ serve didn’t even come close to getting over the net, putting PHS at game and match point. Nofziger dinked the ball for the 25-12 victory.

“We seemed to struggle most of the night just getting things going,” said John Horning, PHS coach. “We had a couple of leads and a couple deficits, but all in all I thought towards the end we started to find their holes better.

“We found out we couldn’t just hit it hard the whole time; they were waiting for that.

“Defensively we did ok. I would have liked some more blocks at the net.

“We just seemed slow with our feet on transitions, on getting to the balls to make some solid plays when we needed them. North Central is scrappy. Not much hit the floor; I give them a lot of credit.

The PHS junior varsity defeated the Eagles in two games.

Edon’s serving gave the Birds problems, as PHS was 48/62 in serve reception. In serving PHS had only three aces, compared to 16 against North Central.

Chelsea Schmucker had five kills, while Nofziger had four. Henrie had three solo blocks. Rohrer-Meck was 49/50 in setting.

The PHS JV lost in two games, while the freshmen won in three.

PHS served 11 aces and was 45/50 in serve reception in the victory. Katie Weber and Nofziger each had seven kills; Jodi Spotts, Henrie, and Schmucker each had three. Nofziger had two solo blocks.

Pettisville was 51/57 in serving and 43/51 in serve reception. Weber served seven aces in the match. Rohrer-Meck was 49/50 in setting.