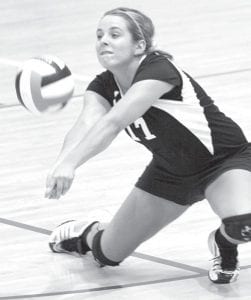 Lauren Frey digs a spike in Pettisville’s first BBC contest with Edon on Sept. 23. The Blackbirds won the first match in five games, so Edon will be out for revenge in their second matchup. The two BBC rivals are both 8-1 in the league and play tomorrow, Thursday, in the Bird Cage at PHS for the conference championship.– photo by Mary Huber

The rematch is set.

The Pettisville volleyball team raised its record to 17- 2, 8-1 in the Buckeye Border Conference with two BBC victories last week.

PHS and Edon, who is 16th in Div. IV, lead the BBC with identical 8-1 records. The two rivals battle for the conference crown tomorrow, Thursday, in the Bird Cage at PHS.

“The girls will be very motivated and excited, and so will Edon. Both teams will come to play, and the team that will win is the one who will execute their game plan the best.

“Our goal will be to play our game, win the serve/ serve receive game, play well offensively and defensively at the net, play scrappy defense in the back row, and win the long volleys with strong strategic play.”

“We were happy with the wins last week vs. Fayette and North Central,” said Horning. “Those wins were necessary to make the match with Edon mean something.”

Laura Rupp served six of the team’s 19 aces, while Stacey King served four and Lauren Frey, three. As a team, PHS was 72/74 in serving.

Katie Yoder had eight kills. Stephanie Yoder and Natalie Hubby each had seven. The team was 55/68 in attacks, including 28 kills.