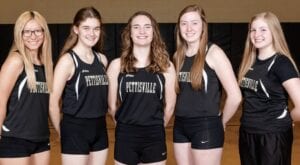 The Pettisville track teams are scheduled to get underway, Tuesday, April 6, in a tri-meet at Archbold with North Central.

Gabe Jaramillo and Marty Rupp are starting their third year leading the program. Jaramillo has 14 years of coaching experience, while Rupp has 33.

The girls team won its sixth straight BBC championship in 2019 (the 2020 season was cancelled due to the Coronavirus pandemic). It was the Birds’ 15th in school history, and 11th in 12 years.

“Strong numbers and some experience will aide us throughout the season,” said Jaramillo.

“For the most part, we have a seasoned team that has the knowledge of what it takes to compete at the varsity level.

“Grace Schnitkey has prepared herself to have a very successful season. With the time and effort she has put in over the last couple years, she is looking to elevate herself within the ranks of Pettisville throwers. 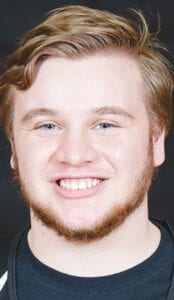 “We have a good number of youths that will come into the season inexperienced, but are looking forward to having a very solid season with some great individual efforts.”

As far as race for the BBC, “there will be some strong opposition among the league, but we are confident in our hope to compete for the league title.

“The one positive thing that I have seen regarding the circumstances of last season is a renewed sense of love for the sport.

“The athletes are eager and anxious to get out on the track and perform. This team is looking forward to the journey that this new season will set us on.”

Heath Waidelich, a senior, is the only letterman returning on the boys team, but, “This is going to be one of the largest boys team we have fielded in quite some time,” said Jaramillo.

“Having the numbers to be able to put together relay teams will allow us to keep competitive in all events.

“Youth and inexperience at the varsity level will prove to be a challenge. With having last year……….’……s season cancelled, the majority of our team will have little-to-no experience competing at this level.

“We are looking forward to putting together an overall competitive team effort in the smaller meets, as well as in invitationals.

“We are hoping to keep pace in scoring at the league meet to put us among the top teams in our league.

“We are excited to have the opportunity to help our young team gain the experience and confidence for an overall successful season.

“As we learned last year, the season isn’……………………..t guaranteed, so we hope to have learned not to take for granted the time we have to grow in sport and in life.”