The event showcases the best high school and junior high science students in the state who have accomplished cutting-edge research in the areas of science, technology, engineering, and mathematics (STEM).

The top Ohio high school science students and selected junior high students presented the results of their original research during the symposium in both paper and poster sessions.

More than 100 students from throughout Ohio presented their own original research on topics from all areas of science.

Jordan Skates and Jacob Dennis were two of 24 paper presenters, which included a 12-minute PowerPoint presentation and three minutes of questions by a panel of research scientists. 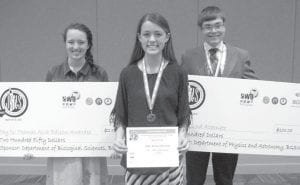 Lee won first place in the ninth-tenth grade division of the poster session. Skates won the Thomas Alva Edison Award, which recognizes the best project using an innovative apparatus built by the student to use in conducting their experimentation.

Dennis placed as one of the top seven paper presenters, placing as second alternate. Alternates represent Ohio at the National JSHS if a first-fifth place winner cannot go. He will attend National JSHS in Dayton, April 27- 30, and present his poster the last week of April.