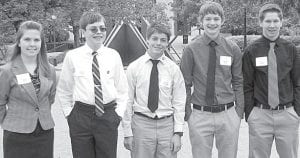 Pettisville students earned awards in recent science competitions. At left: Chrysta Beck, a junior, was recognized at the Ohio Academy of Science State Science Day in Columbus and the International Science Fair in Phoenix, Ariz. Other students received awards at the Columbus event. They are, from left: Jacob Dennis, Seth Brakefield, and Gabe Beck, eighth grade students, and Dustin Nofziger, a sophomore.– courtesy photo

Pettisville students, including three eighth graders, a sophomore, and a junior, did well in recent science competitions.

Chrysta Beck, a junior, earned awards at events both in Ohio and Phoenix, Ariz.

Beck was one of 1600 students worldwide nominated to compete at the International Science and Engineering Fair, May 12-17, in Phoenix.

Her project involved a comparative study of the quality of chicken meat.

At the Ohio Academy of Science State Science Day, Saturday, May 11, at Ohio State University, Beck and Jacob Dennis, an eighth grader, earned superior ratings from the judges.

Dennis earned a perfect score and was awarded third place in the Ohio Soybean Bioscience Awards, which included a $250 cash prize.

He was also nominated by the Ohio Academy of Science for the Broadcom MASTERS competition, an international science fair competition for junior high students.

The national finals is in Washington, D.C., in the fall.

Nofziger also received an honorable mention in the Food Science division. The award includes a one-time $2000 scholarship to Ohio State University if he attends there and declares food science as his major.

All had previously competed at the local and district levels in order to qualify for the state event.

Their projects are supervised by Pettisville science and agriculture teachers, and the research papers are also included as part of the English curriculum.–D.J. Neuenschwander