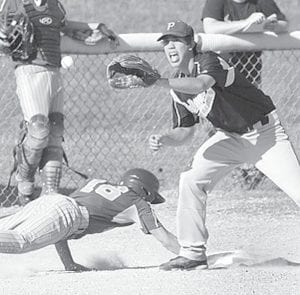 Pettisville third baseman Zach Pursel waits for the throw to try to tag out a Fayette player, but the Eagle beats the throw. Pettisville won the BBC contest, 7-3.– photo courtesy State Line Observer

The Pettisville baseball team split a pair of Buckeye Border Conference games last week, losing to Stryker but picking up a win over Fayette.

The Birds hosted the Panthers, Tuesday, May 1, for a BBC contest that Stryker won 6-0.

Alex Roth suffered the loss on the mound. In four innings he gave up two runs (one earned) on three hits, struck out four, and walked two.

Stryker (7-13, 4-5 BBC) pounded out eight hits, crossing the plate once in the first, once in the third, three times in the fifth, and once in the seventh.

Pettisville ended an eight- game skid, Thursday, May 3, defeating the Eagles 7-3 in BBC action at Fayette.

Cam Norris picked up the victory on the mound. In five innings he gave up three runs (two earned) on one hit, struck out five, and walked three.

Continental (11-10) scored single runs in the first and second innings and one in the sixth.

The Birds scored a run in the fifth and one in the top of the seventh, but were unable to catch the Pirates.

A. Roth took the loss on the mound. In six innings he gave up three runs on eight hits, struck out one, and walked two.

He also had two of Pettisville’s three hits. Both were singles.