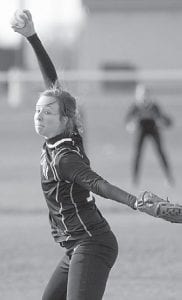 Delaney Nofziger winds up on the mound.– photo by Mary Huber

The Birds hosted Edon, Monday, April 2, and defeated the Blue Bombers 7-2 in their first Buckeye Border Conference contest of the season.

The Blackbirds traveled to Swanton, Tuesday, April 3, and broke a tie at 1 by scoring six runs in the seventh inning for a 7-1 victory.

North Central had 20 hits in the contest to Pettisville’s 11.

Edon led 1-0 after the first inning, but the Birds scored twice in the third for a 2-1 advantage.

The Bombers tied the score in the top of the fourth, and Pettisville scored three times in the bottom of the inning and added two more runs in the sixth for the 7-2 victory.

Delaney Nofziger was the winning pitcher. In seven innings she allowed two runs on six hits, struck out four, and walked one.

The Birds had nine hits, and were led by Ashlyn Bontrager with a double and three runs batted in; Audra Klopfenstein and Emily Hubby, two singles each; and Lexie King, a single and a double.

After four scoreless innings, Pettisville took a 1-0 lead in the top of the fifth.

The Bulldogs tied the score with a run in the bottom of the sixth.

The Birds exploded for six runs in the top of the seventh for the non-league victory.

D. Nofziger was the winning pitcher. In seven innings she allowed one run on three hits, struck out eight, and walked one.

PHS had eight hits and was led by Kaitlin Nofziger with a grand slam home run. Klopfenstein also had a solo home run and a single.

The Eagles led 2-0 after two innings. Pettisville scored a single run in the top of the third.

North Central came back in the bottom of the third and scored eight runs for a 10-1 lead.

The Birds came right back in the top of the fourth and scored eight runs of their own to close the gap to 10-9.

NC scored five more runs in the bottom of the fourth for a 15-9 advantage.

Delaney Nofziger was the losing pitcher. In 5 1/3 innings she allowed 21 runs on 20 hits, struck out none and walked none.

Leading PHS at the plate was Taylor Kruse with a triple, Ashlyn Bontrager with a double, and Emily Hubby with two singles.