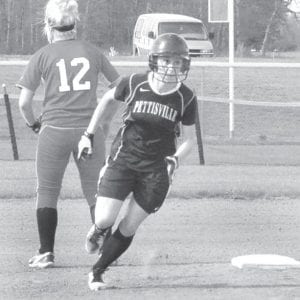 Taylor D’Alelio attempts to score from first base in Pettisville’s BBC game with Hilltop, Thursday, May 2. The PHS junior was called out at home plate.– photo by Mario Gomez

The Birds defeated North Central and Stryker in BBC action before falling to the Cadets, Thursday, May 2.

Delaney Nofziger was the winning pitcher. In seven innings she allowed six runs on nine hits, struck out six, and walked three.

At the plate, Andi Aeschliman hit a double and Johanna Roth added two singles. Nofziger, Emily Hubby, and Kenzie Riegsecker each had singles.

The Cadets led 2-0 after one inning, scored once in the fourth for a 3-0 advantage, and added two more runs in the top of the seventh for a 5-0 lead.

The Birds scored three runs in the bottom of the seventh but couldn’t overcome the deficit.

The Birds had 10 hits compared to five for Hilltop. PHS committed four errors to the Cadets’ three.

Nofziger was the losing pitcher. In seven innings she allowed five runs on five hits, struck out three, and walked two.

At the plate, E. Hubby hit a single and a double. Nofziger had three singles; Amber Klopfenstein, a double; and Kaija Blosser, two singles.

Taylor D’Alelio and Stephanie Hubby each hit a single.

Leading 8-0 after two, the Birds scored once in the third and five runs in the fourth for a 14-3 five-inning BBC victory at Stryker, Tuesday, April 30.

Nofziger was the winning pitcher. In five innings she allowed three runs on four hits, struck out four, and walked one.

Conner Varner was the losing pitcher. In four innings she allowed 14 runs on nine hits, struck out six, and walked six.

At the plate for Pettisville, Roth hit a triple, while D’Alelio hit a single and a double. Blosser and Aeschliman hit two singles each, while Klopfenstein and S. Hubby each hit a single.

Tasha Pegorch hit a single and a triple, and Hannah Doerhmann hit a double.

Nofziger was the winning pitcher. In seven innings she allowed two runs on five hits, struck out six, and walked three.

Pettisville pounded out eight hits, and was led by Klopfenstein with two triples and a single.

Nofziger had two doubles and a single, while Blosser had two singles.