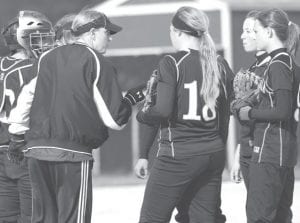 Last night’s winners play for the district championship, Friday, May 18, 5 p.m., at Bryan.

The Apaches (21-2) scored their only two runs in the fifth inning, but that was enough as they recorded the 2-0 shutout.

Delaney Nofziger was the losing pitcher. In six innings she allowed two runs on six hits, struck out three, and walked one.

The Birds had only two hits, singles by Audra Klopfenstein and Adi Bruner.

Bryan closed the gap to 3- 2 with a run in the bottom of the third, and took a 4-3 lead with two runs in the sixth.

Pettisville scored a run in the top of the seventh to send the game into extra innings.

Neither team scored in the eighth, but PHS scored in the top of the ninth for a 5-4 advantage. The Bears failed to score in the bottom of the inning, giving the Birds the non-league victory.

D. Nofziger was the winning pitcher. In nine innings she allowed four runs on 10 hits, struck out four, and walked one.

Pettisville had 13 hits, and was led by Klopfenstein with two singles and two doubles and Lauren Frey with four singles.