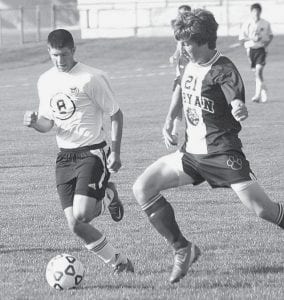 Pettisville’s Jared Avina (8) races a Bear to control the ball in the Birds’ soccer match with Bryan, Thursday, Sept. 25. The Birds won 2-0.- photo by Scott Schultz

The Pettisville soccer team won two games and dropped one last week, improving to 9-3 on the season.

Quinn Nofziger scored the game’s first goal, tapping the ball past the goalkeeper off a pass from Jared Avina. It was the only goal in the first half. Phillip Roth scored the first goal of the second half off a pass from Nofziger to raise Pettisville’s lead to 2-0. Jordan Klopfenstein scored the final goal from a corner kick that found its way through the crowded box and into the back of the net.

In an intense match, Avina scored the first goal when a Nofziger corner kick deflected off his leg. A Bryan defender then swung and missed at the ball, and the diving keeper was unable to stop the rolling ball from going into the goal.

Nofziger scored the game’s only other goal in the second half, volleying a curving shot over the Bryan goalie.

Pettisville and Ottoville played a very physical game. No goals were scored in the first half, despite numerous opportunities by both teams.

Both teams kept the ball moving in the second half. With less than three minutes left, an Ottoville forward blasted a shot from the left of the 18-yard line into the top right corner, just out of the reach of the Pettisville goalie.

Pettisville had numerous chances in the last minutes, but the Big Green defense stood solid to preserve Ottoville’s win.