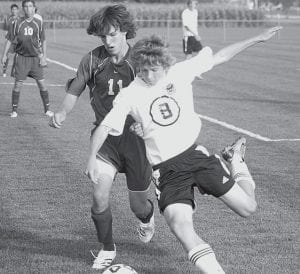 Phillip Roth placed a through ball past Continental’s defense to Quinn Nofziger, who scored in Pettisville’s 4-1 victory over the Pirates, Friday, Oct. 12.- photo by Scott Schultz

The Pettisville soccer team played its last regular season game, Friday, Oct. 12, when it hosted Continental and defeated the Pirates 4-1. Pettisville is 8-7-1 as it enters tournament play.

The match was also senior night. Justin Roth and Aaron Rupp, PHS seniors, were given balls signed by the team in a ceremony before the game.

Emotions were riding high for the Blackbirds, and it showed as they took a 1-0 lead early. The goal was scored when Phillip Roth placed a through ball past the Pirates’ defense to Quinn Nofziger, who blasted a shot into the right side of the goal.

Despite numerous other chances, Pettisville was unable to score again and the half ended with the 1-0 lead.

Pettisville came out strong in the second half. Nofziger dribbled through the Continental defense and shot from outside the 18-yard line into the upper left of the goal.

Nofziger completed a hat trick as he once again dribbled through the defense, this time after a pass from Jordan Klopfenstein.

Continental finally found the back of the net after a cross that was hit just past the outstretched arms of a diving Andy Switzer.

Nofziger scored a fourth time as he dribbled through the Pirate defense. Toward the end of the game with the score out of reach, Dick Nyce, PHS coach, substituted out his seniors, who received a thunderous applause for their contribution to Pettisville soccer.