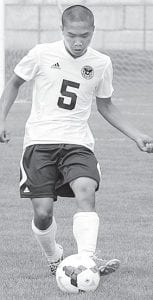 Pettisville had 15 shots on goal while Waite had two.

The Birds were back on the road, Friday, Sept. 12, to Kalida.

The Wildcats (5-1-2), ranked seventh in Division III by the Ohio Scholastic Soccer Coaches Association, scored only one goal, but it was all they needed as they blanked PHS 1-0.

Kalida had seven shots on goal while PHS had six. Levi Nofziger dribbles the ball up the field.– photo by Mario Gomez