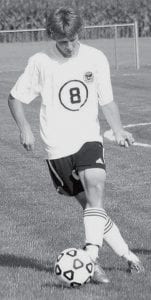 Philip Roth keeps an eye on the ball as he dribbles down the field.- photo by Scott Schultz

Toledo Christian made the trek to Pettisville, Saturday, Sept. 22 and defeated the Blackbirds 5-2.

Pettisville is 6-5 on the season.

Pettisville had 18 shots during the game, but it was not until Brian Plank passed the ball to Quinn Nofziger in the second half that the scoreless tie was broken.

The PHS defense and goalkeeping stopped all Bulldog threats of scoring to preserve the 1-0 victory.

The Eagles started the scoring early as a shot was drilled past the PHS goalie. They came right back and scored off a free kick from outside the 18-yard line, then scored again off a cross through the box.

Pettisville came back as Nofziger scored off a long pass from Clay Norris to cut the deficit to 2.

TC scored two more goals before Nofziger dribbled past the Eagles’ defense for the 5-2 final.