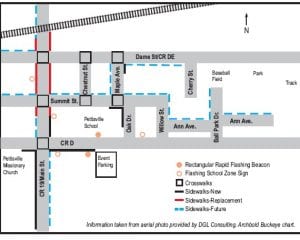 A plan to repair, replace, and add sidewalks to the unincorporated community of Pettisville was presented to members of the community at a Thursday, April 5 meeting.

Not all members of the community were in favor of the project.

Of the approximately 30 people in attendance, several spoke against the sidewalks.

Many said they were in favor of repairing existing sidewalks, but were opposed to adding new sidewalks.

Among their reasons were having to clear snow from the walks; the fear that sidewalks will increase property values, and therefore, property taxes; and the fact that some people simply did not want a sidewalk in their front yard.

Unlike an earlier attempt to do a sidewalk project in Pettisville, Dean Genter, Fulton County commissioner, said the current plan is in line for $440,000 in grant funding through the Ohio Department of Transportation “Safe Routes To School” program.

He said no local money will be spent on the project.

The goal of the program, which dates back to 2010, is to making walking and bicycling to and from school safer for youngsters.

The photo showed sidewalks on both sides of the street along Co. Rd. 19-Main Street being replaced from the Norfolk Southern crossing to a point south of Summit Street.

New sidewalks would be constructed on the east side of Main Street south to Co. Rd. D.

A sidewalk would be built along the south side of County Road D, from the east drive of the Pettisville Missionary Church to the crosswalk near the Pettisville School event parking lot.

Also, a sidewalk would extend south on the west side of Co. Rd. 19, from Co. Rd. D to the point where houses stop.

A short length of sidewalk would be built on Maple Ave. to connect existing sidewalks, and around the northeast corner of the school property along Oak and Summit streets.

A proposed phase II plan, shown in blue lines on the aerial photo includes potential sidewalks on the east side of Co. Rd. 19 south of Co. Rd. D; along Summit and Willow streets to Ann Ave., then eventually the high school baseball diamond; along Dame Street-Co. Rd. DE; and north on Co. Rd. 19, north of the railroad tracks to St. Rt. 2.

The only way sidewalks would be funded would be through a property tax levy, and Clinton Township voters in Wauseon probably won’t support a tax for sidewalks in Pettisville.

“The blue lines will never happen,” he said.

Also, she said the grant funding will pay for improved crosswalks.

Jim and Toni Ballin, who live on Co. Rd. 19 north of the tracks, opposed the sidewalks for several reasons.

One, the distance from the front door of their home to the edge of Co. Rd. 19 is relatively small; they fear a sidewalk could end up near their front door.

Jim Ballin pointed out Pettisville School students who live north of the railroad tracks are bused to school; therefore, a sidewalk for students is not needed.

Jim Ballin also said it’s only common sense that if someone is walking on the roadway and a car is coming, they should get off the road.

“What about personal responsibility?

“If you’re going to walk on the road, you need to be taught to get off the road when a car comes.

“We can’t give the school everything it wants,” he said.

Amy Metz-Simon, grants coordinator for Fulton County, said there was a problem with the addressing of the notices. Several were returned by the post office.

A second meeting of the sidewalk project proposed for Pettisville is Thursday, April 19, 7 pm, at the Pettisville School cafeteria.