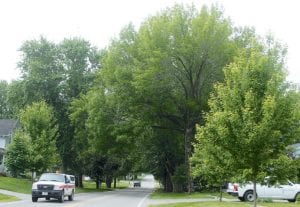 Main Street in Pettisville, before and after the recent ODOT sidewalk project. The top photo was taken Friday, June 6. Workers began removing trees Monday, June 10. The bottom photo was taken Thursday, July 24. While several large trees have been removed, ODOT was able to save some. An ODOT spokesman said 16 trees were taken down, less than the 42 that ODOT had originally planned to remove.– photos by David Pugh

New sidewalks in Pettisville have been finished for quite some time, but Theresa Pollick, Ohio Department of Transportation spokesman, said there still is work to do.

The work, she said, includes signs, pavement markings, and planting.

Pollick said 16 trees were removed to make way for the sidewalk project.

The number was reduced from the original plan, which called for removal of 42 trees.

New trees will be planted when weather permits, probably in late September or October, Pollick said. 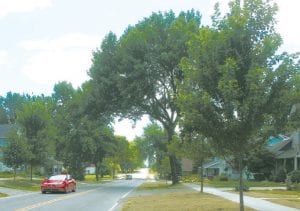