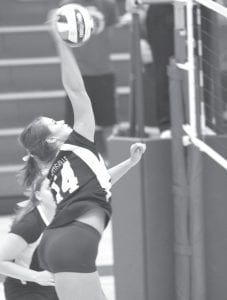 Above: Kylee Garcia smashes a spike against Edon, Thursday, Sept. 23 in Pettisville’s BBC battle with the 10th-ranked Blue Bombers. The PHS senior served five straight points to build the Blackbirds’ lead to 7-1 in the fifth and deciding game, which PHS won 15-10. It was the first time since 2003 PHS defeated Edon in varsity volleyball. At left: Laura Rupp sets the ball for an attack against the Blue Bombers. Rupp was 60/61 in setting in the contest. The 15th-ranked Blackbirds raised their record to 13-1 on the season with four victories last week. Edon dropped to 11-2, 4-1 BBC, after the loss to Pettisville. The BBC rivals play in a rematch, Thursday, Oct. 14, in the Bird Cage.–photos by Mary Huber

“Edon’s a great team, and they have been for years,” said John Horning, PHS head coach. “I think they’ve won the league the last five years.

“It was a great team win. There were a lot of big points throughout the match, both offensively and defensively.”

“We talked before the match about being a unit, about playing as a team, about picking each other up,” said Horning. “We had some people go down; people had to step up and fill in.

“This was a well-conditioned team, a motivated team, and a focused team tonight.

“Seeing their faces in the locker room after this one was priceless.”

Edon was ahead 12-10 in the first game when the Bombers scored four straight points to go up 16-10. The Birds closed to within three and were down 19-16 when Chelsea Chapin’s kill gave Edon a 20-16 lead.

The Bombers were at game point, 24-18, but couldn’t put the game away. PHS climbed back to 24-23 before a Blackbird spike went long, giving the game to Edon.

In the second game it was Pettisville that took a 22- 16 lead. The Blue Bombers climbed to within two, down 23-21, when the Birds scored the last two points, including a Natalie Hubby kill at game point, to put the game away.

Game three went Edon’s way. The Bombers led 17-10 when a Stacey King kill gave the side out to PHS. The Birds climbed to within two, down 17-15, when Beth Aschliman’s kill killed Pettisville’s mini-run. The Bombers won the game 25-18.

Pettisville had a scare in the fourth game. The score was tied at 11 when Laura Rupp went down with an injury. Luckily for PHS, it was just a leg cramp, and Rupp was able to reenter the game one play later.

Edon held a 17-13 advantage when Pettisville began its comeback. The Birds tied the score at 20 when Edon was called for carrying the ball, and an ace by Stephanie Yoder gave PHS a 21-20 lead.

The Blue Bombers called a time-out. On the next play, Calli Imm’s spike went long for a 22-20 PHS advantage. S. Yoder served another ace for a 23-20 lead, and Edon called another time-out.

Coming out of the timeout, S. Yoder served up yet another ace for a 24-20 lead.

At game point, Hubby’s spike went into the net, giving Edon a side out. But on the next play, Hubby ended the game with a kill.

The Birds jumped out to a 7-1 lead in the fifth game behind the serving of Kylee Garcia. The momentum was in Pettisville’s favor, and the Birds kept it going. PHS led 13-10 when two straight kills by Hubby and Katie Yoder gave PHS the game and match.

“Kylee Garcia served one heck of a game in that fifth game,” said Horning.

“I’m proud of the team. There’s not one individual that made it happen. We had some really huge blocks, some huge kills and some huge digs. I didn’t think Edon got a lot of good swings down the stretch.

“League-wise, this was absolutely huge. We had some pressure on us, after the Stryker loss (on Sept. 14). We had to get this one.

“They said it’s going to be a battle in our place (Thursday, Oct. 14) and I believe it.” Pettisville and Edon are both now 4-1 in the BBC.

Rupp served five aces while S. Yoder served three. King, Hubby, and Lauren Frey each served two. As a team the Birds were 90/101 in serving with 15 aces.