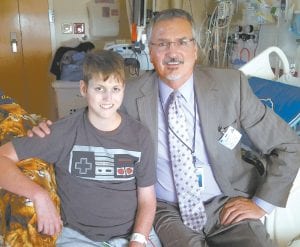 When Haden Bevard, a Pettisville High School sophomore, died after complications from heart transplant surgery, the school, and the community, handled his passing with grace.

When it was over, students from both schools gathered on the court in a moment of prayer for Haden.

Lane said Haden was troubled by heart problems since birth.

Earlier this year, he had been at the C.S. Mott Children’s Hospital at the University of Michigan in Ann Arbor, for a number of weeks.

“He came back to school– we were hoping he would be stronger and healthier. Then he ran into some more issues right around Pumpkin Fest (Friday, Oct. 6).

“That put him back in the hospital up there,” Lane said, saying Haden never left the hospital after Sunday or Monday, Oct. 8-9.

Following the Friday, Dec. 1 Pettisville-Fayette boys basketball game, students from both schools gathered on the gym floor with players, cheerleaders, and coaches to say a prayer for their schoolmate, Haden Bevard. Haden died earlier that day from complications from heart transplant surgery. Pettisville students were informed of Haden’s death after they went home from school that day.– courtesy photo

The page hasn’t been updated, “just because it’s been so busy for the family,” said Lane.

“It had been tough for them. They have a child in elementary school here (Rylee, a third grader), and a younger child with mom, and to try to keep Rylee, who’s the younger brother, in school, and be up there with Haden, and his dad (Byron) working in Defiance– it’s been a real struggle for the family, time-wise, just to balance everything.”

Lane drove to Ann Arbor twice to visit with Haden.

After his first visit, on Wednesday, Nov. 1, a photo of Haden and Lane was posted on the school website.

The Pettisville community showed its support for Haden at the Foundation Game against Napoleon, Tuesday, Nov. 21. 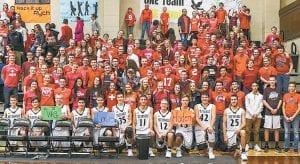 While Haden Bevard was in the hospital, fans from Pettisville and Napoleon high schools wore red, Haden’s favorite color, to the PHSNHS Foundation Game, Tuesday, Nov. 21. Team members are holding signs that say, “We Love Haden.” When shown the photo, Haden was surprised by the number of people wearing red. “He was pleased and proud,” said Mike Lane, PHS principal.– courtesy photo

Lane explained a Foundation Game is a game allowed to be a fundraiser by the Ohio High School Athletic Association. A percentage of the proceeds goes to the OHSAA, then the rest goes toward a specific event or activity.

In the past, the Foundation Game raised funds for Fulton County Toys For Cheer.

John Poulson, high school agriculture and FFA teacher who “kind of runs the game for us,” Lane said, was approached by Brian Leppelmeier, athletic director.

“Brian approached him to see if it would be okay to use the proceeds (of the game) to help offset Haden’s medical expenses.

“John was very gracious and said yes,” Lane said, adding that Haden was in the PHS agriculture program.

There were several fundraisers at the event. Lane said money raised in a donation box was “matched and doubled by a group of anonymous donors in the community.”

The proceeds from a 50- 50 raffle were directed to Haden, and the winner of the drawing donated his or her winnings, as well.

But there was more than just the money.

“I’d say 80% of the Napoleon crowd, including the basketball team, came over with red on. That was very impressive,” Lane said.

A photo was taken showing the PHS team holding signs saying, “We Love Haden,” with the crowd behind them mostly in red.

“Haden had no idea of the impact he has had on other students,” Lane said.

“He thought a few of his classmates would wear red. When he saw the pictures– kids not even in his grade level, kids he’s never really talked to– he was pretty pleased and proud.”

A Heart For Haden

Lane said Haden’s mother was keeping him up to date, often with text messages.

Haden was taken into surgery about 1 am, Sunday, Nov. 26.

But while Haden was ready, his new heart wasn’t, so the start of the surgery was delayed.

There were complications, but they were expected.

Lane said Lindsey told him there were some issues with blood leaking around the new heart. The leaks were patched.

The heart was in Haden’s chest and pumping.

He finally came out of surgery at 3 pm.

Haden’s condition took a turn for the worse. Lane said Haden had his biggest setback on Tuesday, Nov. 28, when a bacterial infection developed that kept his body from recovering.

“Then on Wednesday (Nov. 29), the doctors told his mom they didn’t expect him to make it through the day,” Lane said.

Lane talked to her by phone during the day, then went back to texting.

“And then the final notification came through at 1:58 (pm) that Haden’s gone,” said Lane.

School was in session. How would the PHS staff tell the students?

“We’d been trying to have this conversation all day about what we were going to do,” Lane said.

“We had scheduled our first pep rally of the year for the boys and girls basketball teams at 2:30 (pm), and you don’t want to send kids home from school in an emotional state.

“In talking with Lindsey, she and I agreed we would prefer the students get home to their parents and then send out an instant alert, so the children would have their family around them when the word came.”

Lane said he didn’t want word to arrive as soon as the kids got home. “I kind of wanted to have the majority of their parents there with them,” he said.

Instant Alert is a telephone based system that automatically places calls to everyone in the Pettisville school community.

In part of his audio message, Lane said, “Haden fought valiantly until the end. He was so proud to be a Blackbird and have the friends he did at school. Haden has been an inspiration to many who knew him.

“We will remember his bright eyes and brilliant smile, and the way he pushed himself in spite of all of his health issues over the years.

“Haden will be greatly missed by his family and friends,” Lane said.

Before Haden passed, Lane said seniors Nichole Foor and Jensi Shaw asked if they could have a prayer meeting after the game for Haden.

At the start of the game, before the national anthem, a moment of silence was held to honor Haden.

“I was really proud of Nichole and Jensi for taking the initiative to do that. We have such great kids here,” Lane said.

“Part of the Pettisville difference is we have a lot of kids for whom faith is very important. They know that Haden is being taken care of right now,” he said.

Because of the way Haden’s death was announced, and the support each student has in their families, their school, and their community, “I didn’t expect to walk into a situation where we had a lot of students grieving to the point where we would need to bring in additional counselors,” he said.

Someone brought in a vase of flowers that was placed on top of Haden’s locker.

“Haden was a really cool kid, in the way he handled life in spite of the obstacles that his body presented him,” he said.

“You hate losing anybody, especially a kid.”