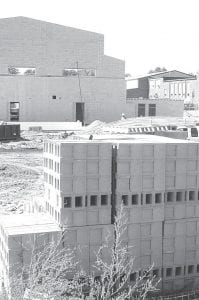 Over the last few weeks, the new Pettisville School building has been taking shape. In this photo, taken on Sept. 30, from the east looking west, the new building can be seen, along with the current school building. Much of the old school will be demolished before the project is complete. –photo by David Pugh

“We’re a bit behind schedule, and the contractors have addressed that, bringing more people on-site,” Switzer said.

More masons are on the job now. Soon, brick will be laid on some of the higher portions of the building.

In the ICF system, two forms made of an insulating material are used to build a form, then concrete is poured between them. The system is simple, fast, and since the insulated forms remain in place when the job is done, very energy-efficient.

Small problems have been encountered.