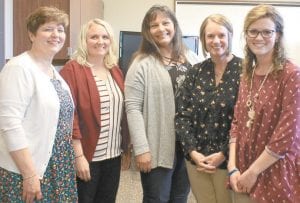 Pettisville School Board met with five new staff members at its regular meeting, Monday, May 13.

Two are filling new positions in the special education field.

Jamie Fox was hired to serve as a special education teacher in the lower grades, serving primarily hearing impaired students and their families.

She was employed at the Northwest Ohio Educational Service Center in Archbold to work with hearing impaired students.

A Pettisville resident, her children attend school in the district.

Dawn McKibben, who has been working in the district as a speech and language pathologist as an NWOESC employee, will continue in the same job as a Pettisville district employee. Pettisville used her services two days a week.

A one-year contract for McKibben to work three days a week was approved.

McKibben has worked as a speech pathologist since 1992.

Alexis King, a PHS graduate, was hired to be the new first grade teacher. She is a graduate of Bethel College, Mishawaka, Ind., and was employed as a fourth grade teacher at Edon Local Schools.

Kisha Genter is the new intervention specialist. The position was open due to the transfer of Barb Stuckey to the open position teaching fifth and sixth grade social studies.

Genter is a Pettisville resident with a Master of Education degree from BGSU.

Sandy Blackwood is the new head cook. She came to the meeting to be introduced to the board.

She filled the position left vacant when Margo Bostelman resigned in October. Blackwood was previously employed at the Henry County Senior Center. She is the mother of four adult children.

Steve Switzer, superintendent, also told the board the district has two open positions for aides.

A library manager aide position is open because Rachel Horning, who held the position, will be a full-time special education aide.

The district will also add a special education aide who is proficient in sign language.