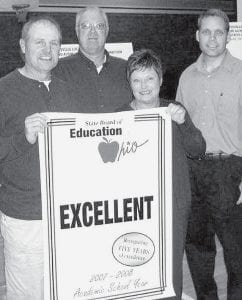 Sue Westendorf, of the State Board of Education, third from left, presents a banner recognizing the Pettisville Local School District for five years of excellent ratings on the Ohio Department of Education school report card. School board members accepting the award are, from left, John King, president; Dan Bruner, vice president; and Daniel Sauder. – courtesy photo

Sue Westendorf, State Board of Education member, presented a banner recognizing Pettisville as an excellent school district prior to the Monday night, Nov. 3, board meeting.

The banner includes an emblem that acknowledges Pettisville attaining an excellent rating for five years.

The presentation was made at the final informational meeting for the proposed new school project.

Following the informational meeting, the school board held its regular November meeting. The meeting date was changed to allow board members to attend the Ohio School Board Association Capital Conference next week in Columbus.

Chris Lee, district treasurer, reported that income tax revenue received by the district for the second quarter was up 7% from the same period last year.

“The income tax revenue should be above the projections used in the five- year forecast,” Lee said.

Loren Roth, board member, asked when the district might see the effects, if any, of the current downturn in the economy.

Both Lee and Steve Switzer, district superintendent, agreed that if the economic downturn were to impact income tax revenue, it would be several months before it would show in the fi- nancial reports.

Seniors Alyssa Beck and James Baatz received the honor due to scores that ranked in the top 3% on the qualifying test. Lane said both students have a 4.0 grade point average.

Lane credited the teachers, along with the English, art, and technology teachers, for helping students achieve excellence in their science fair projects.

Switzer recommended the board consider hiring a policy service to help the school district update the policy manual. Board members agreed to hear presentations from two services that are used by other districts in Fulton County.

Board members also approved a supplemental contract for drama for Rebecca Dadisman and Adrian Whitney for the one-act plays that were presented the previous weekend.

The contract will be for half the annual drama amount, which usually includes two plays and other activities.

All board members were present for the relatively short meeting.

The next regular board meeting will be Monday, Dec. 8 in the school library following the board Christmas dinner at approximately 7 pm.- D.J. Neuenschwander