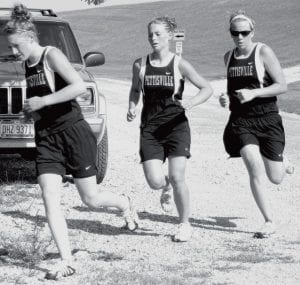 The Pettisville varsity boys “A” cross country team came in 13th out of 44 teams in their division at the Tiffin Carnival, Saturday, Sept. 8.

Alex Frey was the first Blackbird across the finish line. He was 13th out of over 300 runners in 16 minutes, 39 seconds.

Tom Wagner, PHS coach who accompanied the team to Tiffin, said his team showed a lot of potential.

“It is early in the season and they work hard, so we will continue to get better,” he said.

Rachel Beck was the first runner in for Pettisville across the line, running a 23:36 to finish 32nd. Hannah Beck crossed next for Pettisville; she was 40th in 24:13.

The Pettisville boys did not have enough runners to be ranked in the team competition.