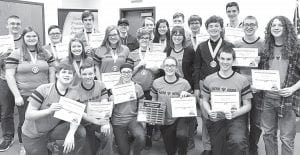 Students from both PHS and Wauseon received individual medals.

“I am so proud of how hard the group is working. They are eager to learn and work diligently to specialize in various academic areas,” Dorosz said.

“We are surrounded by very strong teams in this area, and the competitive matches have made the season incredibly rewarding.”