by Pam Graber
Special To The Buckeye 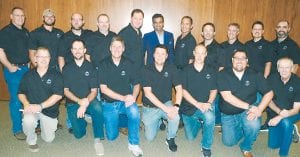 “About eight years ago, we saw a need and decided to do a Bible study,” Scott Rupp said.

The group bills itself as “a group of men from the Pettisville, Wauseon and Archbold communities who have a heart for the Lord, for service, and for outreach.”

“We made it into a community thing, not a church thing,” Rupp said. “We’ve got about four or five churches represented.”

“Just a group of guys with some common interests and common goals,” Josh Schramm said.

“We used to just pick a book of the Bible that we would work through,” Schramm said.

“As we started putting more structure around the group, laying out what our group mission was and our mission statement, Scott came up with what we call the Triangle,” Schramm said.

The Triangle aims to train men to be spiritual leaders, both in their homes and in their communities, by using scripture to teach.

“We want to make sure all the guys’ foundations are the same, that we love God with all our hearts, that we study the word, and pray and are obedient to what the scripture says,” Rupp said.

“The stuff on the side (of the Triangle) helps us in life– how we act, and how we respond in society,” Rupp said.

“I would say, for the most part, it’s not your typical group of guys,” Schramm said. “It’s an eclectic group.

“I think one thing we all have in common is when it comes to our gifts and abilities, we wouldn’t fit well, as far as serving in the church.

“We serve in ways that you often don’t find a lot of churches getting involved in.

“Whether it be going out and doing landscaping for a widow, or we’ve had different guys involved in a homebuilding project for a young widow up in Michigan.

“The guys in our group are not the ones you’d see leading a Sunday school class, leading worship on a Sunday morning, and they’re probably not on a church committee, but they’re committed Christian men who want to serve in a capacity that they can best serve.”

“Honestly, if you look in our area in spring or fall and you throw a stone in any direction, you’re going to hit a church that’s holding a women’s conference, and nothing for men.

“We’re trying to bring in some speakers that are more geared to men. Speakers that preach a Gospel message, but also that kind of wake us up a little bit, too.”

“It’s always been important to us that the event is free,” said Rick Graber.

“We don’t want anyone to miss an event because they can’t afford the ticket.”

“Our sponsors have the same vision. We have a dedicated group of local businesses who are very consistent with their giving,” Schramm said.

“There’s always enough there to do the next thing,” Rupp said.

“We’ve never had to turn anything down because there wasn’t enough to pay for the repair, or whatever needed to be done.”