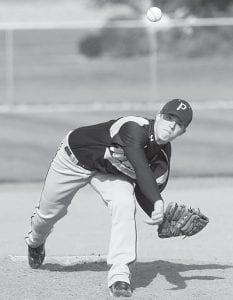 The 2012 baseball season is underway, and after a week of non-league games Pettisville stands at 2-2.

Losing their first two games to Wauseon and Fairview, the Birds won a doubleheader over Delta.

Pettisville opened the season at Wauseon, Tuesday, March 27 and suffered a 12- 1 defeat in five innings.

The Birds mustered just one hit by Alex Roth while the Indians smacked 12 hits.

Pettisville scored its lone run in the top half of the third inning.

The Indians scored two runs in the first and exploded for six runs in the second. Wauseon added one in the third and three in the fourth.

Travis Beck recorded the loss. In two innings he gave up eight earned runs on six hits and walked one.

Ty Suntken picked up the win. In four innings he struck out 11, walked four, and gave up one earned run on one hit.

Pettisville hosted Fairview, Thursday, March 29, with the Apaches picking up a 7-4 victory.

Pettisville banged out seven hits and mounted a seventh-inning rally before dropping the non-league contest.

After two scoreless innings Fairview took a 2-0 lead in the top of the third. The Birds, led by Tanner Rufenacht, who went 2-3 at the plate, scored one run in the bottom half of the inning.

Fairview widened the lead in the fifth, crossing the plate four times for a 6-1 lead. The Apaches added one in the top of the seventh.

Roth suffered the loss, giving up seven runs (one earned) on nine hits, striking out three, and walking four.

The Birds outlasted the Panthers in a 14-11 slugfest in the first game of a doubleheader, Saturday, March 31, to pick up their first win of the season.

Pettisville pounded out 17 hits to Delta’s 10.

Scoreless after two innings, Pettisville exploded for six runs in the third and five more in the fourth.

Delta made it close with two runs in the bottom of the third and six more in the fourth, but PHS added three insurance runs in the fifth.

Delta added three more runs– one in the fifth and two in the sixth– for the 14- 11 final.

Beck picked up the win on the mound. In 5 1/3 innings he gave up 11 earned runs on eight hits, struck out two, and walked one.

Pettisville didn’t let up in the second game, pounding the Panthers 14-4.

After a scoreless first inning by both squads, Pettisville spread out 14 runs over the next four innings before the game was called after the fifth.