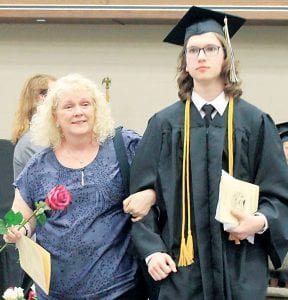 Joshua Bock, a class speaker and co-valedictorian of the PHS Class of 2019, exits with his mother, Dorothy (Montgomery) Bock, PHS ‘77.– photo by D. J. Neuenschwander

The ceremony included speeches by three members of the class.

Lindsey Crossgrove and Joshua Bock spoke as covaledictorians, since both had perfect 4.0 grade-point averages for their entire high school careers.

Crossgrove spoke about memories from their elementary years, like teachers using marble jars and colored cards as incentives, and fun projects like the consumer fair and tie-dying t-shirts.

She paid tribute to Abigail Yoder, a classmate who died in a car accident when they were fourth graders.

Bock, who joined the class in sixth grade, spoke about their junior high and high school years.

He pointed out his classmates had been involved in a large variety of activities, including nearly every sport that anyone could mention, and artistic endeavors like writing, music, photography, and drawing.

He also mentioned plays and musicals that he and his classmates had participated in, and other activities like FFA, FCCLA (Family, Career, and Community Leaders of America), academic quiz team, and science fairs.

Rick Graber, a Pettisville school board member, gives son Joshua a hug after presenting him with his diploma during the PHS commencement exercises, Sunday, May 26.– photo by D. J. Neuenschwander

He advised his classmates to find things that they were good at, and do them.

Not A Bad Place

The third class speaker was Zach Basselman, who was selected by his classmates.

Basselman said that, “Pettisville is not a bad place to grow up,” and went on to say he appreciated the safe environment and close relationships with his classmates and teachers, who served as mentors.

He advised his classmates that as they leave the boundaries of Pettisville behind, they should try to live a satisfying life, whether it fits the conventional American Dream or not.

He acknowledged that college is not the only option, and said that each person should find what makes them happy and go do that, even if it is unconventional.

The remaining 32% plan to enter the workforce in various fields, including construction, farming, electrical work, and landscaping.

According to Wyman, members of the class have earned scholarships and grants totaling nearly $800,000.

Michael Lane, high school principal, announced two awards. The first was the Top Scholar award, which is given to the student with the highest grade point average. The award went to Crossgrove and Bock.

The Citizenship Award is given to the student chosen by the high school faculty and class officers, and is based on scholarship, leadership, character and school support.

This year’s award went to Crossgrove.

The ceremony included music provided by the high school brass quartet, high school choir, and a special selection by senior choir members. The soon-to-be graduates chose to sing “All Star” by Smash Mouth.

Following the ceremony, class members were escorted out of the gym by their parents, and they formed a receiving line in the school cafeteria area.–D.J. Neuenschwander