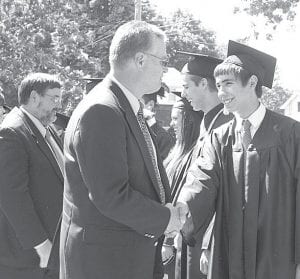 Pettisville High School handed out 56 diplomas to members of the Class of 2010 during the graduation ceremony, Sunday afternoon, May 30, in the school gymnasium.

Following PHS tradition, the recipients of several awards were announced.

Greg Waidelich who was chosen for the Citizenship Award, Pettisville’s highest honor. It is given annually to a student chosen by PHS faculty and class officers. It is based on scholarship, leadership, character and attitude.

Chelsea Schmucker was the top scholar among this year’s graduates. She finished her high school career with a cumulative grade point average of 3.994 on a 4.0 scale.

Twenty-one students were given scholar awards for maintaining a grade point average of 3.3 or higher. A total of 17 Pettisville students met the requirements for an Ohio honors diploma.

Jacinta Nafziger, Pettisville school counselor, announced that 81% of the graduates were collegebound, 14% were seeking to enter the work force, and 5% planned on a year of service directly after high school.

She also announced that various class members had been awarded a total of $1,055,000 in college scholarship money.

Nafziger offered the graduates a “pencil parable.” He advised they could do great things if they allowed themselves to be held in God’s hands, if they accepted sometimes painful sharpening, remembered they could correct mistakes they might make, and recognized that the most important part of their life was what was on the inside.

He challenged the seniors to leave their mark wherever they might go.

Kendahl Baer, class president, gave a serious talk about fun, and Zane Miller summarized past-times of the class using song titles to describe each portion of their educational experiences.

Diplomas were presented by John King, school board president, and Dan Bruner, board member.

Following another PHS tradition, the graduates received the congratulations of family and fiends in a receiving line held on the sidewalk in front of the school after the ceremony.–D.J. Neuenschwander