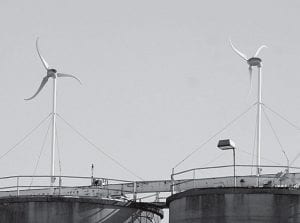 Two wind turbines stand atop the Pettisville Grain Company elevator in Pettisville. The company took advantage of a government grant to purchase the turbines, which cost about $11,000 each. Company officials expect the turbines to pay for themselves in electricity savings in about four years.- photo by David Pugh

Neil Rupp, company president, said four wind turbines have been installed at the top of company grain elevators- two at Pettisville and two at Delta.

The units are rated at 1.9 kilowatts each. The scimitarshaped blades are 12-feet diameter.

Rupp said one of the co-owners saw information about a government grant program for installing wind turbines, which covered about half the cost.

The units were installed in December.

When asked about the performance, Rupp said, “so far, it’s too early to tell. I think we’ll have payback in four years with the government grant. Without the grant, it wouldn’t be feasible,” he said.

“In the long run, they’ll be worthwhile.

“We look at the cost of electricity staying steady or going higher. The wind is free,” he said.

The two wind turbines don’t begin to provide all the electricity needs, but every little bit helps, Rupp said.

Rupp said before a wind turbine can be operated, Toledo Edison must approve the system.

If TE power fails, the wind turbines must stop generating. If they continue to generate electricity, and feed into TE power lines, line crews could be electrocuted by handling what they thought were “dead” wires.

Rupp said if a power surge strikes, the turbines turn off.

The turbines are about 120 feet above the ground. Turbines at lower levels don’t generate as much, because buildings and trees block the wind.

“The higher the better,” Rupp said.

Rupp said they chose the turbines with 12-foot diameter blades “because the next size up was quite a bit bigger,” he said.

He said the turbines cost about $11,000 each, but again, the government grant paid about half the cost.