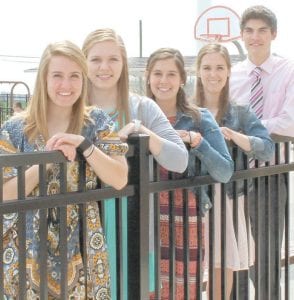 These members of the PHS Class of 2016 say there are advantages to attending Pettisville that aren’t reflected in test scores and graduation rates; it’s the close relationships that are formed by attending such a small school. From left: Hannah Herring, Hannah Hoops, Natalie Hoffmire, Amber Klopfenstein, Andrew Sauder.– photo by D. J. Neuenschwander

According to seniors at Pettisville High School, there are real advantages to attending Pettisville beyond those that are reflected in its high test scores or graduation rates.

Seniors who were interviewed pointed most often to the close relationships that are formed at a small school like Pettisville.

“We really know each other well,” Hannah Hoops said. “Most of us have grown up together.”

All of the students interviewed, and indeed, the majority of the class of 40, attended all 13 years of their schooling together at Pettisville.

When asked about those who had started later and not been part of their elementary school class, they had to stop and think.

“There are some,” Natalie Hoffmire said. “We had some students join us in junior high, I think.”

“But you almost forget that they weren’t always part of the class,” added Andrew Sauder. “Everyone just seems to fit in.”

Hoops agreed. “We are all really close now, and we are all part of the same group.”

The seniors said the strong relationships go further than those formed with their own classmates.

Hannah Herring said that she has close-knit friendships with underclassmen, including freshmen and junior high students.

“We get to know the underclassmen better because our school is small. We are involved in a lot of the same activities, including sports and plays,” she said.

Sauder agreed, and said that he feels the students have “respect for each other, and younger and older students share a lot of the same values.”

All seniors interviewed participated in at least one sport during their high school years.

They all felt that strong relationships were built with their teammates, regardless of age and year in school.

Amber Klopfenstein said one advantage to attending Pettisville is directly related to the K-12 building, where students from kindergarten through 12th grade are housed in one building.

“We see the elementary students during the day, and they recognize us,” she said.

In addition to sports participation, all students interviewed had spent time working with the elementary classes either as classroom aides, or in tutoring programs or similar ways.

Herring said, “The younger kids are watching us, and we know we need to set a good example.”

In addition to the relationships among the students, the seniors felt they had good opportunities to build relationships with their teachers.

“We have really caring teachers,” Hoffmire said. “They care about you personally, not just your education.

“You can go to our teachers and talk to them about anything, and ask them for advice on life problems,” she said.

The seniors admitted that attending a small school can have a negative side.

“When you go to a small school, you have the opportunity to get involved in everything,” Klopfenstein said.

“But that can have a negative side, because it limits your ability to focus on one thing and develop specific skills.”

“A small school like Pettisville can’t offer as many of the top classes, like AP classes,” Sauder said.

“We have calculus, but not AP calculus. When we go to college, there will be students from other schools who will be ahead of us.”

“We don’t have as many advanced classes,” Hoffmire agreed, “but we can take classes through Northwest State (Community College), which helps somewhat.”

All of these seniors have plans to attend college.

Hoops plans on majoring in exercise science at Anderson (Ind.) University. Sauder is heading to Clemson (S.C.) University to major in industrial engineering.

Klopfenstein will play softball and major in special education at Huntington (Ind.) University.

Do they feel ready and prepared for the future?

Herring said, “My senior year has brought a drastic realization of where I want to go, who I want to be.

“I went on the spring break trip with my Spanish Class to Mexico, and I had a chance to develop an understanding of another culture. That helped set me up for where I want to go next, and apply what I learned in school to life.”

“I think we are all ready for a new chapter in life,” Sauder agreed.

“Pettisville has been a great place to grow up, and to go to school,” Klopfenstein said.

“But I am ready to get out and try somewhere new.”

So the Pettisville seniors are preparing to go out into the world, leaving their small school and small town behind.

But they all hope that they will take the strong relationship building skills they learned at Pettisville with them wherever they go.