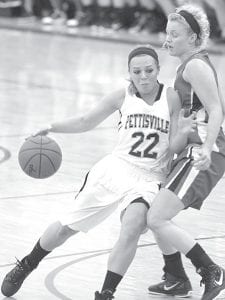 Kaitlin Nofziger (22) uses her body to drive past Caroline Arnos of Ottawa Hills, Saturday, Feb. 25, in the Div. IV sectional final at Wauseon. Nofziger scored 20 points, including five of Pettisville’s eight points in overtime, to lead the Birds to a 44-38 OT win and sectional title.– photo by Mary Huber

Pettisville lost the lead only once in its 44-38 overtime victory over Ottawa Hills, Saturday, Feb. 25, in a Division IV sectional final at Wauseon.

“I’m really proud of our ladies and the resiliency they showed. It starts with our five seniors, but we got some key minutes from our bench.

Bontrager hit a threepointer to open the scoring. Zimmerman answered for the Green Bears, driving down the middle for two.

Nofziger hit a bucket and Bontrager hit her second trey for an 8-2 lead.

Pettisville jumped out to a 13-3 lead on a basket by King and a traditional three-pointer from Lauren Hostetler with 3:30 left in the first.

Dewire hit a deuce to open the second period, closing the gap to 13-12.

The Green Bears were called for their seventh foul with 6:36 left in the first half, but T. Hostetler couldn’t convert on the one-and-one.

Pettisville was called for its seventh foul with 6:11 left, but Arnos missed the front end of her one-andone.

The Birds outscored the Green Bears 7-4 in the last six minutes of the second period for a 20-16 halftime lead.

It could have been closer. With 4.3 seconds left, Arnos stole an inbounds Pettisville pass and put up a shot from half-court as time expired.

The shot missed, but Ar- nos was fouled on the play. At the foul line for three shots with no time left on the clock, Arnos made one for the 20-16 halftime score.

Pettisville outscored the Bears 5-4 in the third for a 25-20 lead going into the fourth.

Nofziger stole the ball and drove for a layup to open the final eight minutes, giving PHS a 27-20 lead.

Ottawa Hills took its first lead of the night, 36-34, when Rumpf connected on a three-pointer from the corner with 2:03 left.

Nofziger was fouled driving the baseline with 45.6 seconds left. She tied the score at 36 with a pair at the foul line.

Ottawa Hills wound the clock down for the last shot. Dewire went for a shot with six seconds left, but missed.

PHS grabbed the rebound and called for a time-out with 3.3 seconds on the clock.

The Birds inbounded from half-court. Nofziger took a shot at the buzzer, but it was just short of the basket, sending the game into overtime.

The Green Bears hit only two foul shots in the extra period, while Pettisville scored on back-to-baskets by Nofziger, three of four free throws by T. Hostetler, and one of two at the foul line from Nofziger for the 44-38 final.

“We knew they’re a team of runs,” said Waldvogel.

“We knew they were gonna make a run at us, but you have to withstand that.

“I’ll look back at my five seniors, and I’ll take those five girls any day, and rely on those guys to hold the wall for us a little bit, and they did it.

“These girls have played together since third grade. They understand how to play the game.

“They’re gonna battle till the end.

“We went to Kaitlin Nofziger late in the game and she made a great post move.

“Ashlyn Bontrager did an exceptional job on the Arnos girl inside with rebounding. (Arnos) has had up to 25 rebounds in a game. Ash played just about every minute of the game, and she was dead tired, but she kept fighting her.

“Lexie King and Audra Klopfenstein and Lauren Frey, also. They were in there on the help side helping with Arnos on the inside, especially there at the end.

“They did an exceptional job getting in and helping Ash.

“It was definitely a team effort.”

Pettsiville raised its record to 15-6. Ottawa Hills ended with a 19-3 record.

Nofziger was the only scorer in double figures, with 20 points.