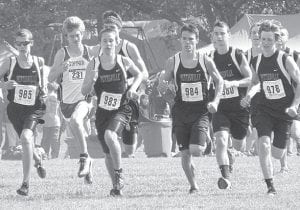 Above: Members of the Pettisville boys cross country team at the start of the BBC Jamboree are, from left: Tanner Rufenacht, Dominic Frey, Aaron Bruner (behind Frey), Justin Pursel, Zach Davis, Austin Dykstra (back), Josh Borton. The PHS boys team finished fourth. At left: Lexie King, Samantha Shinhearl, and Brady Avina run in the girls race. The Blackbirds won the girls race at the BBC Jamboree, Tuesday, Sept. 21, and placed second at the Van Wert Invitational.–photos by Jack Frey

The Pettisville boys scored 94 to finish fourth. Hilltop won with 30.

Tanner Hostetler was the first PHS runner into the chute, finishing third in 22 minutes, 44 seconds.

Second across the line for PHS was Brady Avina. She finished fifth in 23:44. Samantha Shinhearl followed Avina, placing sixth in 23:54. 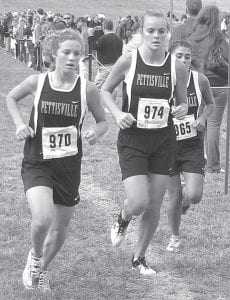 Dominic Frey was the top finisher for the Pettisville boys. He crossed the line at 18:54 to claim 10th place.

Chris Waidelich finished 25th in 20:51. Two teammates were hot on his heals: Justin Pursel just beat Daniel Sauder with times of 20:54 and 20:56, respectively. Pursel was 26th, and Sauder claimed 27th.

The Blackbirds traveled to Van Wert, Saturday, Sept. 25, for a large invitational meet. Varsity teams competed in the gray division, and the PHS girls finished second out of 12 teams with 106 points. Kalida claimed the team championship with 71.

The Pettisville boys team finished seventh out of 13 teams. Minster literally ran away with the championship, beating second-place Crestview by 56 points.

“All the girls had a good run, and anytime you can be runner-up at a big invitational that is a very good thing,” said Tom Wagner, PHS head coach.

“The boys did a good job,” said Wagner. “We had a freshman leading them, and a sophomore right there as well. I was encouraged by what I saw.”