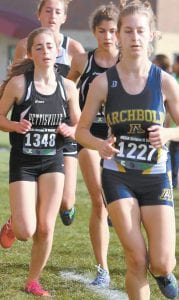 The Pettisville girls cross country team qualified for the Division III state meet for the third straight year after finishing second at the regional meet, Saturday, Oct. 28, at Tiffin.

Minster won its fourth straight girls title, finishing with 40 points. The Wildcats had four runners in the top eight.

The top eight teams advance to the state meet this weekend.

“Everybody and their brother knew Minster would win. They are the defending state champion and have been number one in the state polls all this year.

“We knew we had a shot at runner-up going in. We knew Columbus Grove would be very tough, and they were! 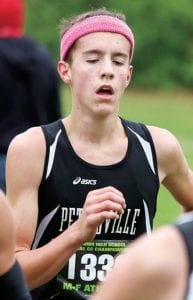 Elizabeth Sauder was first into the chute for PHS, finishing second in 19 minutes, 16 seconds.

Sarah Foor was the final scoring runner for PHS, placing 83rd in 21:26.

For Archbold, Kylie Sauder was the first runner into the chute, placing 16th in 20:00.

Camryn Hudson was the final scoring runner, finishing 120th in 22:05. 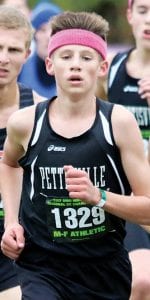 “Qualifying as a team was their goal, and they accomplished it!

“It’s the first time in school history that an Archbold girls team has qualified for state. There have been a lot of individuals over the years, but not a full team.

“The regional race was a great experience for our young team and will be beneficial leading on to the state meet this weekend.

“These girls have continued to work each week, and I am proud of them for persevering through this season.

“Some great accomplishments so far, and we believe there are more to come! I’m very proud of each of them!”

Pettisville’s Logan Rufe- nacht and Max Leppelmeier both qualified indivudally for the state meet after finishing in the top 28 of the Div. III boys race.

“Both Logan and Max ran very smart races,” said Wagner. “They knew what they had to do and did it.

“They started back in the pack at almost 40 and worked their way up to qualify.

“I’m very proud of both the girls and the boys and how they ran today!”