The Pettisville Ever-Ready 4-H Club is an anomaly.

In one of the smallest towns in the area, it is the largest 4-H club in Fulton County. With 166 registered members and advisors, club meetings buzz with activity.

In the beef group, members give prepared “demonstrations” on giving injections (shots) to their animals or work on showmanship skills.

Others look at diagrams of rabbit body types or learn poultry anatomy to prepare for skill-a-thon questionand answer competitions.

When other clubs in Fulton County average 28 members per group, why is 4-H booming in Pettisville?

Through 4-H, youths take on large projects and undergo judging at the end of the summer.

Miscellaneous projects such as sewing, gardening, or cooking are judged before the fair and displayed at the fair. Animal project members compete in shows during the fair with kids from 4-H clubs across the county. 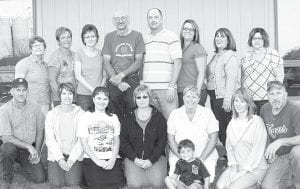 Projects are not an easy undertaking, say twins Aaron and Adriane Bruner, 16.

For their beef projects, the two work with their cattle two hours a day as fair time approaches.

Besides practicing showmanship techniques, they work an hour a day on grooming their animals.

“You always have to be out there working with them. If you don’t, it really shows by the time it comes to show at the fair,” said Adriane.

Kayla Wyse, 9, also spends time on her 4-H project every day. She takes care of four market rabbits, one of which she’ll show at the fair.

Wyse joined 4-H this year because she likes animals. She is enjoying her experience, as her rabbits keep her entertained.

She keeps a close eye on them, because, she said, “I had one wander off underneath a picnic table.”

Wyse and the Bruner twins say 4-H isn’t all work and no play. They enjoy special events such as pool party meetings, and the Bruners say almost all of their friends are in the program.

Since the third grade, when Adriane and Aaron joined 4-H, Adriane said 4- H is not something they just squeeze in among sports and other summer commitments.

They’ve learned a lot in the program, including responsibility, said Aaron.

Their earnings from selling steers will help pay for college.

Cathy King can explain the draw of 4-H.

In the program as a child, she returned as an advisor when her daughter joined. Now a head advisor, King says, “The kids all excel.

“They do the skill-a-thons and the showmanships, and they all do such a great job. And then they want to do it again.”

Proving her point, around 20 Pettisville Ever-Ready members advanced from county judging to place at the Ohio State Fair this year. They earned 67 awards, as each member placed in multiple categories.

Clarence and Kate Bruner were among the club’s earliest advisors. They started their 20-year stint as advisors in 1971.

They were “talked into it” by Orrin Miller, says Clarence.

At that time, the club was almost the same size, with around 120 members, but they had livestock projects only.

Of their own will, says Clarence, their four children joined. That included Mark Bruner, Aaron and Adriane’s father.

Today, the club attracts kids from as far away as Lyons and Sylvania.

King credits this popularity to the 20 advisors.

“We have a lot of people who are willing to be advisors and who give of their time.”

Seven advisors have over 10 years of experience with the club.

“Each species (of animal) has people that really are knowledgeable in that area, and they’re just so good with the kids,” said King.

King also cites the parents’ roles and the inner-group support that members show each other for the club’s success.

“It’s just a community thing, just like everything else we do here in Pettisville.”