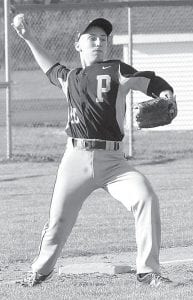 Austin Horning fields a grounder and throws to first base for an out against Wauseon.– photo by Mario Gomez

The Pettisville baseball team kicked off the season with a pair of losses to Northwest Ohio Athletic League squads Wauseon and Delta.

Two games were cancelled due to the weather.

The Indians recorded five hits while the Birds mustered just two, a pair of singles from Landon Roth and Justin Rupp.

Christian Barhite suffered the loss. In 4 1/3 innings he gave up five runs on five hits, struck out two, and walked three.

Delta led 5-0 after four innings and added one in the fifth and two in the sixth for the 8-2 win.

The Birds scored their two runs in the top of the seventh.

Logan Rufenacht picked up Pettisville’s only hit, a single that knocked in two runs.