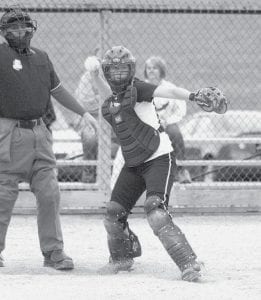 Pettisville catcher Erica King throws to first base in the Birds’ contest with Hilltop.- photo by Scott Schultz

The Pettisville softball team used three runs in the first inning to spur it past Fayette 7-3, Monday, May 5 in a Buckeye Border Conference contest.

Edon scored seven runs in the first two innings on its way to a 13-4 BBC victory, Thursday, May 8.

In a contest that was originally to be played on May 15, Hilltop beat the Birds 8-6, Friday, May 9.

Leading 5-1 after three innings, the Birds scored two runs in the fourth to take a 7-1 lead. The Eagles came back to also score two runs, but that finished the scoring for both teams for the 7-3 final.

The Birds had 11 hits and were led by Karina Rohrer- Meck. She was 2/3 with a double, triple, and two runs batted in.

L. Brinegar led Fayette at the plate. She was 2/3 with a stolen base. The Eagles had seven hits.

The Pettisville bats were silenced as Thiel, the winning pitcher, allowed only two hits, while Delta had 10.

The Panthers led 3-0 after the first inning, and scored two runs in the second, three in the third, and four in the fourth.

Alexa Short was 1/2 at the plate and had a stolen base.

Pettisville scored all four of its runs in the first inning. The Birds led 4-2 after one inning, but the Bombers exploded for five runs in the second for a 7-4 lead.

Edon scored three runs in each of the sixth and seventh innings for the 13-4 league victory.

Riegsecker was the losing pitcher. In 5 1/3 innings she allowed 10 runs on six hits, struck out three, and walked six. Drew Lantz pitched in relief.

Pettisville had four hits, led by Kayla King with a single and a double.

The score was tied at 1 after the first inning, and PHS took a 2-1 lead in the bottom of the second. The Birds extended the advantage to 3-1 after four and 5-1 after five.

On the mound, Riegsecker allowed eight runs on 11 hits, struck out three and walked three in seven innings. PHS committed five errors while Hilltop made three.

Rohrer-Meck had a double for PHS.

The Blackbirds are scheduled to play Stryker, today, Wednesday, 5 p.m. in a Division IV sectional semifinal at Liberty Center.

The winner plays secondseeded Ayersville for the sectional championship, Friday, May 16, 5 p.m.