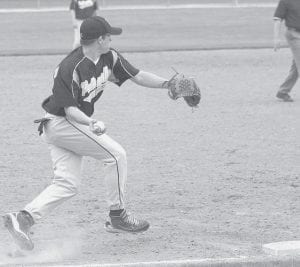 Clay Norris snags a grounder and throws for an out in Pettisville’s 11- 1 victory over Holgate, Friday, May 9. The Birds advanced to the Div. IV sectional final with a 4-1 first-round victory over Antwerp, Saturday, May 10. PHS plays Ayersville for the sectional title, Friday, May 16, 5 p.m. at Ayersville.- photo by Scott Schultz

Quinn Nofziger pitched Pettisville (8-9) into a meeting with Ayersville in a Division IV sectional final as the Birds picked up a 4-1 sectional semifinal win over Antwerp, Saturday, May 10 at Ayersville.

Nofziger pitched a complete game and belted a three-run homer in the bottom of the fifth inning to pace the Birds. He gave up one run on three hits and struck out seven.

Pettisville plays the secondseeded Pilots for the sectional championship, Friday, May 16, 5 p.m. at Ayersville.

Pettisville pounded out nine hits, Friday, May 9 to pick up its seventh win of the season over visiting Holgate. Jordan Klopfenstein picked up the win, giving up one run on two hits, striking out three, and walking two.

A host of Birds picked up hits. Nofziger, Josh Bruner and Aaron Rupp all went 2/3, with Nofziger banging out a double and a run batted in.

The host Blue Bombers shut out the Blackbirds 1-0, Thursday, May 8.

The Birds (5-1 BBC) mustered only hits and gave up one run in the bottom of the seventh.

John Kesler recorded the win. Pitching a complete game, he gave up two hits, struck out 11, and walked one.

Bruner and Nofziger went 1/3 at the plate, with Nofziger hitting a triple.

Traveling to Hicksville, Monday, May 5, the Birds picked up a 5-2 victory.

Nofziger went the distance, giving up two runs on four hits, striking out 11, and walking one.

Klopfenstein, Bruner, Harris King, and Aaron Rupp all went 1/3, with Bruner and Klopfenstein each recording an RBI.