Pettisville Class Of 2008: Close-Knit And Caring 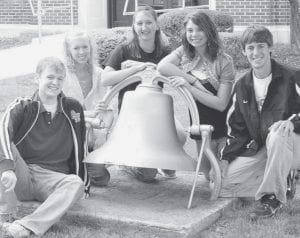 Members of the Pettisville High School Class of 2008 recently discussed some of their attributes and their influences. They are, from left, Seth Graber, Libbey Eicher, Heaven Randolph, Sarah Allbee, and Aaron Rupp. Not pictured: Kelly Plassman.- photo by D.J. Neuenschwander

The Pettisville graduating class of 2008 is made up of 49 unique individuals who together form a close-knit and caring group that could serve as a model for high school students everywhere.

He said he will miss this group when they leave.

“They have shown great leadership, they are respectful, they demonstrate maturity, and they care about each other and about the causes they have chosen to support,” Lane said.

A number of the seniors echoed some of their principal’s thoughts when they were asked to describe their class.

Libbey Eicher, who has attended Pettisville since kindergarten, described the class as “close-knit and caring, with good moral values.”

Eicher experienced some of her classmates’ caring ways when she had back surgery her sophomore year.

“They made get well cards and a video for me,” Eicher said. “It helped to know they cared.”

Class members showed similar care for two other classmates who were injured in accidents.

Aaron Rupp agreed, adding that he liked the small class size at Pettisville because it meant you could be close with everyone.

“Our class is diverse in that we have a lot of different people with different interests, but we are still unified and close at the same time,” Rupp said.

Heaven Randolph, who went to Pettisville for her entire education with the exception of her junior year, called the class “a big group of friends.”

Randolph spent her junior year as a page in the U.S. House of Representatives, living and attending classes in Washington, D.C.

“That did change things, since I wasn’t involved in things here for that entire year,” Randolph said. “It was hard to get back involved when I came back. But I look back and can remember the great times we had all through our years.”

Two students who joined the class later also had good things to say about their classmates. Sarah Allbee came to Pettisville as a junior. She cited the caring she saw among the students.

“I remember the trip the class took to Ottawa (Ohio) to clean up after the flood,” Allbee said. “We were helping others as a whole class, and it was a real bonding time.”

Kelly Plassman came to Pettisville in her eighth grade year, and wasn’t happy about it at first.

“But the other students accepted me, and Mr. Lane helped me get where I’m at today,” Plassman said.

Plassman’s high school experience has been different from some of her classmates for several reasons.

She chose to attend a special program offered at Four-County Career Center that allowed her to go to school in the mornings and get work experience as a nurse’s aide in the afternoons.

She completed her educational requirements to graduate at the end of the first semester, but is back at Pettisville each morning to take a computer class that will help her as she pursues a nursing degree at Northwest State Community College.

Plassman also credited Mrs. Bacon, a Pettisville teacher, with helping her by always being available to talk.

A number of the other seniors credited the principal and various faculty members as major influences on their lives and their classmates.

“The first influence for me is God,” said Rupp. “But our teachers here at school were really influential as well- even going back to our elementary teachers.”

Graber agreed, saying nearly all the faculty members had made a point to tell the class that they appreciated them and that they would be missed.

Randolph said going to Washington her junior year and attending classes with the other Congressional pages from all over the country helped her appreciate a lot of things about Pettisville and its school.

“Pettisville has a great academic program,” Randolph said. “Some of the other students were not prepared as well as I was for the classes we took.”

Allbee and Eicher both said they appreciate the importance placed on academics by the Pettisville faculty, as well as the example the faculty and staff set for the students.

Eicher said, “The teachers have high moral standards and they know how to get respect.”

The Pettisville Class of 2008 seemed to take advantage of the strong academic program at Pettisville.

All these students plan to use their academic achievements by furthering their education.

Rupp plans to study mechanical engineering at Kettering University in Flint, Mich., and Randoph will major in biology at Capitol University in Columbus.

Their varying plans are a clear indication of the uniqueness and diversity of the individuals in the class.

But their common bond as members of the Pettisville class of 2008 also helped make them who they are, and will give them a firm foundation for their future.