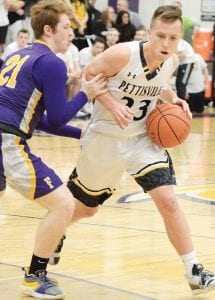 Pettisville fought through a tough first half against Buckeye Border Conference foe Fayette, but used a strong second half to coast to a 69-51 win in a Division IV sectional final at Bryan, Friday, March 1.

“They’re gonna try to take away what you want to do, and our guys had to adjust.

“Our kids were pretty confident early on with what was going on in the game.”

The win helped the Blackbirds (17-6) claim their first sectional championship since 2014. They advanced to a district semifinal against fellow BBC co-champion Stryker (17-6), tonight, Wednesday, 8 pm, at Napoleon.

The Panthers won their first matchup 59-52, but the Birds won the second 66-63 in two overtimes. 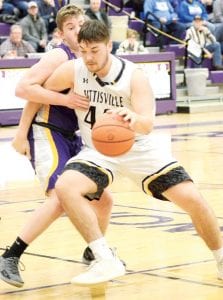 Graeme Jacoby muscles his way to the basket.– photo by Mario Gomez

Hicksville defeated PHS during the regular season 66-47, while the Birds beat the Bulldogs 55-27.

After defeating Fayette twice this season– 62-61 in two overtimes and 59-43– the Birds were hoping the third time would be their charm to a long tournament run.

Fayette used its adrenaline to force a pair of PHS turnovers to start the game.

Trey Keefer scored the first points to give the Eagles what turned out to be their only lead of the game, 2-0.

Eagles Jose Aguilar and Noah Brinegar tied the score at 6.

After Detric Yoder drained another three for Pettisville and a pair of Fayette free throws, Sam Rychener and Graeme Jacoby scored the final four points of the quarter for a 13-8 PHS lead.

Rychener stopped the run with a basket; Tanner Lemley answered for Fayette.

A Yoder steal and layup gave Pettisville a little momentum as the second quarter wound down, but it was quickly drained when Keefer nailed a three with 1 second left to send Fayette into the half trailing 28-24.

“I thought Fayette was really trying to keep it packed and try to take away Sam and Graeme inside, which we kinda knew was going to happen,” said Leppelmeier.

“Our guys stepped up and hit some shots early on.”

Birds Pour It On

Pettisville came out on fire in the third, scoring the first seven points to open a 35-24 gap.

Keefer kept Fayette in the contest, scoring 10 of the Eagles’ 12 third-quarter points, but the Blackbirds were hitting on all cylinders.

Every starter contributed in a 19-point third quarter to push PHS to a 47-36 advantage.

Pettisville kept the foot on the pedal in the fourth thanks to 13 points by Yoder and a solid defensive effort.

“He (Yoder) did a great job leading our team,” said Leppelmeier. “He really shot it well from the outside; he has the ability to do that.”

The Birds opened their biggest lead at 67-45 before Leppelmeier replaced his starters with 1:41 remaining.

Yoder led all scorers with 27 points. Vickery added 13 and Rychener had a doubledouble with 10 points and 10 rebounds.