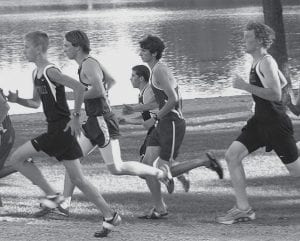 In the first of three Buckeye Border Conference Jamborees, the Pettisville boys ran to a first-place finish, and the girls were third.

The races were held at Harrison Lake State Park on Thursday, Sept. 20, with Fayette serving as host.

In the boys race, the Blackbirds finished with 49 points, one point ahead of second-place Hilltop. Fayette was third; Stryker was fourth.

The league championship will be determined by combining team places in all three BBC meets.

Pettisville’s Lincoln Frey was 6th in 17:56. Brandon Hamilton was Pettisville’s fourth runner to cross the line; he was13th in 18:48.

“The boys won this one,” said Tom Wagner, Pettisville coach. “But there are four good teams in the BBC, and it is going to be a tight race to see who finishes with the championship.”

In the girls race, North Central claimed first place with 33 points. Fayette was second with 36; the Birds were third with 80.

Rachel Beck claimed sixth place for Pettisville with a 23:23 run on the hilly part of the lake.

The Blackbirds ran at the Van Wert Invitational, Saturday, Sept. 22. The boys finished third out of 17 teams; the girls were 10th in their division.

In the boys race, perennially tough Minster won, with East Canton second in a very close contest that was decided by the tie-breaking sixth runner.

A. Frey led the Birds, flying to a fourth-place finish in 16:43. Austin Borton crossed the line at 17:04 for seventh.

Other runners for Pettisville in the varsity race were Josh Bruner, 20:01, and Harris King, 20:53.