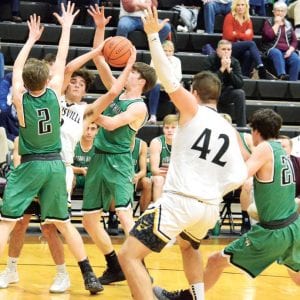 Surrounded by a pair of Green Bears, Mitchell Avina looks to an open Graeme Jacoby (42).– photo by Mario Gomez

The Pettisville boys basketball team split a pair of contests last week when the Birds hosted Ottawa Hills and traveled to Edon for a Buckeye Border Conference contest.

The Green Bears opened with a 6-0 run before Graeme Jacoby hit a bucket for PHS.

Max Leppelmeier scored seven of Pettisville’s 11 firstquarter points, with Jacoby hitting the other four, as PHS trailed 15-11 after one.

The Birds outscored Ottawa Hills 8-6 in the second period, with Jacoby scoring six of those points, but were down 21-19 at the half.

“We knew coming in that they were gonna keep Graeme from touches and really front the post,” said Brian Leppelmeier, PHS head coach.

“I felt we had some shots outside that didn’t fall, but in a game like this, it comes back to them getting to the rim. It takes us out of our flow offensively when you’re not getting the stop.”

The Birds opened the second half with a 7-4 run that gave them their first lead of the game, 26-25.

The Green Bears answered with a 9-2 run over the final 5:38 of the period for a 34-28 advantage going into the final eight minutes.

Ottawa Hills made just two field goals in the fourth but was 12-17 at the foul line.

“Ottawa Hills is a very good basketball team,” said Leppelmeier. “They do a great job putting the ball on the floor and getting to the rim.

“They really put pressure on us at the rim, and we didn’t do a good enough job.

“This is the reason we schedule Ottawa Hills. You’re always gonna get quality basketball, and… it’s another game where you’re gonna find things that get exposed.”

Leppelmeier led all scorers with 21 points.

Drew Hoffman and John Kight scored 15 and 13 points, respectively, for the Green Bears.

Pettisville took to the road, Saturday, Jan. 4, to Edon for a BBC contest.

The Bombers opened with a 9-6 first-quarter lead, but Pettisville went on a 15-7 tear in the second to lead a 21-16 at the half thanks to nine points by Leppelmeier.

Cayden Jacoby scored five points in the final stanza as the Birds closed with a 37-28 win.

Avina led all scorers with 12 points, while Leppelmeier added 11.

Pettisville was 12-44 from the field for 27% with five three-pointers.