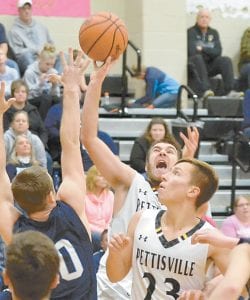 Top: Dillon King gets off a shot against the Locos, Saturday, Dec. 9. Bottom left: Sam Rychener works to get to the basket. Bottom right: Graeme Jacoby shoots around Montpelier’s Jacob Bailey.– photos by Mario Gomez

“I think it’s important to get off to a good start in the league,” said Brian Leppelmeier, PHS head coach.

“Five of our first seven regular season games are conference games, so it’s important to get off to a fast start.”

Pettisville led 12-6 after one and exploded for 22 points in the second to build a 34-13 halftime lead. 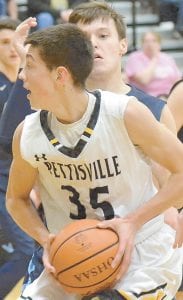 Travis Seibenaler and Logan Bloir paced Edon with nine each.

Pettisville shot 51% from the field on 27-53 shooting, including eight three-pointers.

Jacob Bailey scored backto back buckets for Montpelier for its only lead of the game, at 7-5.

Jacoby, Rufenacht and Landon Roth scored the final eight points of the quarter for a 13-7 PHS lead.

The Locos pulled within two, 14-12 with 6:26 to play in the half, but Jacoby scored a layup and then ended a three-minute scoring drought with another basket for an 18-12 lead.

After Detric Yoder scored on a steal for a 20-12 Pettisville lead, Montpelier got a bucket from Colin Houk for the final points of the half for a 20-14 halftime score.

Kolden Uribes opened the second half with a basket to pull Montpelier within four, but Yoder hit a pair of free throws and then had another steal and layup, giving PHS a 24-16 lead.

The Locos scored their final points of the third on an Evan Friend layup at the 4:45 mark.

Pettisville then went on a 9-0 run, starting with a short jumper from Yoder, followed by a Jacoby layup.

With 3:50 left in the period, Taylor Muehlfeld, Montpelier head coach, was hit with a technical foul, which Rupp turned into two successful free throws.

Yoder and Vickery scored the final three points of the period to give Pettisville a 33-18 lead.

Bailey and Uribes scored the first four points of the fourth, but then Uribes was hit with a technical foul.

The teams traded baskets the remainder of the game.

“Early on in our previous games we’ve started very well from the perimeter,” said Leppelmeier.

“That didn’t happen tonight, and we had to adjust.

“I thought our decisionmaking late in the game was great in getting the looks that we wanted to get.

“We were getting looks inside, but we just weren’t finishing. But that’s gonna come with a little more time in the season.”

Uribes chipped in 11 points and Bailey 10 for Montpelier.