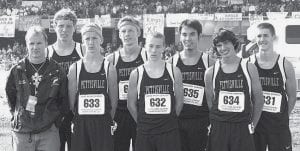 The Blackbirds finished in seventh place as a team, higher than any other boys team in the history of the school.

They were led by an outstanding run of junior Austin Borton, who ran the 3.1 miles in 16:17; 12 seconds faster than his previous best time.

Borton was named an All- Ohio runner for his 10th-place finish.

Alex Frey, a senior, also turned in a great race. He ran16:40 or 31st. Frey missed All-Ohio honors by a mere six seconds.

The three sophomores on the team were the next three across the line for the Blackbirds.

Lincoln Frey claimed 68th, 17:04, only one second off his personal best time set at the regional meet the week before.

Jacob Nofziger ran17:37, 105th, against the best runners in the state.

The three Pettisville sophomores faced stiff competition, since two-thirds of the runners at the state meet are juniors or seniors. 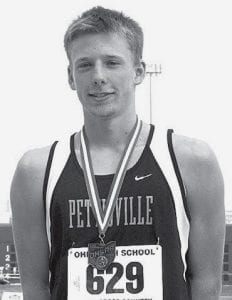 “We were really glad to make it here,” said Tom Wagner, PHS coach. “This is the best boys team I have ever coached, and they all ran with a lot of heart. You can’t ask for more than that.”

The highest finish at the state meet by a Pettisville boys cross country team in the past was the eighth-place finish in 1981.

When the team returned to Pettisville Sunday afternoon, it was escorted by two fire trucks from Wauseon and a caravan of cars.

Fans gathered in the school parking lot to congratulate the team and celebrate the recordsetting finish to its season.

Wagner talked about his appreciation of all the supporters and fans who were present, and who had traveled to Columbus to join the estimated crowd of 20,000 spectators who watched the race at the Scioto Downs race track.

Wagner praised the hard work the runners had put in year round.

“They were a great group of boys to work with,” said the coach. “They worked as a team throughout the season, and they really showed what teamwork was all about.”