Logan Rufenacht takes a jump shot over a Blue Bomber. He scored 13 points in Pettisville’s 70-29 victory to win a share of the BBC title with Stryker.– photo by Mario Gomez

Pettisville claimed a share of the Buckeye Border Conference title with a 70-29 dismantling of the Edon Blue Bombers, Friday, Feb. 22, at Edon.

“I was really pleased with our start,” said Brian Leppelmeier, PHS head coach.

“We moved the basketball extremely well. It’s a credit to our kids and how hard they play.”

Sam Rychener and Graeme Jacoby scored a combined 14 points to help PHS jump out to a 19-2 first-quarter lead.

Edon scored the next six points but Pettisville ended the final 2:30 of the period with a 15-2 run for a 56-22 lead into the fourth.

Every senior PHS player took the floor in the final eight minutes and contributed to the victory, and received a standing ovation by the Pettisville faithful who made the long trip. 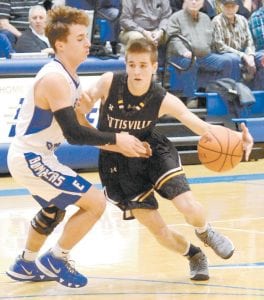 “With the exception of Austin Horning (injured), we were able to get our six seniors in and get them the playing time they deserved,” said Leppelmeier.

“I’m just proud of them and the way they’ve bought into the program.

Caleb Keim and Eli Grieser scored six and five points, respectively, to help Pettisville hold a 14-7 scoring advantage in the fourth and lock down the 70-29 win.

Rychener led all scorers with 23 points while Logan Rufenacht had 13.

Tate Schaffter and Drew Gallehue each scored 10 points for Edon.

Leppelmeier has been head coach for three seasons. The Blackbirds finished as BBC runners-up in 2017 and league champions in 2018.

“Playing everybody twice in the league is tough, because you’re getting everyone’s best shot. I’m a whole lot smarter when I’ve got good players, and we’ve got some good, smart players.

“They’ve done a nice job in the face of adversity.”