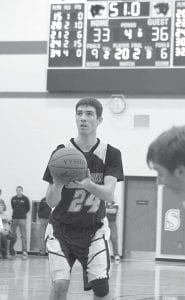 Aaron Bruner eyes the basket, having already made the front end of a one-and-one with 51 seconds left. The PHS senior also made the second free throw, giving the Birds a 37-33 lead over Stryker. Pettisville defeated the Panthers 41-33 and won the BBC for the ninth time in 10 years.– photo by Mary Huber

The Pettisville boys basketball team assured itself of a Buckeye Border Conference championship with a 41-33 victory at Stryker, Friday, Feb. 17.

It is the ninth BBC title in 10 years for the Birds. PHS finished out of the hunt last year.

“That was one of the goals for the kids,” said Greg Nofziger, PHS head coach.

“They were really disappointed that a year ago we couldn’t get it done, but they just strapped on and got ready to play this year and that was one of their biggest goals to accomplish.”

Neither team led by more than four points until Pettisville took a 39-33 lead with 37.3 seconds left in the contest.

The score was tied at 22 after three, leading to a wild finish.

“The first half got pretty ugly,” said Nofziger. “We couldn’t throw it in the ocean. They (the Panthers) were struggling.

“I can’t fault our defense for only giving up 14 points,” in the first half.

Stryker grabbed a twopoint lead, 26-24, early in the fourth. It was its last lead of the game.

Aaron Bruner tied the score with a pair at the foul line. Zach Pursel put the Birds ahead with a deuce, and David Reyes made a pair of free throws to give PHS a 30-26 lead with 4:35 left.

Taylor Brown hit a threepointer for Stryker. Aaron King answered with a trey for Pettisville.

Reyes hit a pair at the foul line, taking the difference back to four.

Conner Frey drove the lane for two with 59 seconds left, and the Panthers were down 35-33.

Bruner and Reyes each hit a pair at the foul line to open the lead to six, 39-33.

After Pursel missed a pair of free throws, Jacob Valdez and Bruner each hit one of two at the foul line in the fi- nal 16 seconds for the 41-33 final.

“I was super pleased with our defense,” said Nofziger. “Our goal all week was to try to control (Conner) Frey. There’s a young man with so much ability.

“I thought Arrin Short did an excellent job on him.”

“I thought Jacob Valdez did an excellent job, which then allowed David Reyes to give us a lot of help-side defense that we really needed.”

Reyes “really has a feel for the game,” said Nofziger. “He knows what’s happening. He can see it happening before it happens. He saw the double teams coming; he was able to make a lot of reads tonight and really make them pay for it.”

Reyes led all scorers with 17 points. Bruner finished with 11.

Brown led the Panthers with 15. Garrett Fritch was also in double figures, with 10.

The Birds committed only five turnovers, to Stryker’s 10.

Wauseon outscored PHS 31-18 in the second half for the 23-point difference.